Through years of development, Bilibili is now home to a large number of high-quality Chinese anime works and one of the largest Chinese anime production companies. It has launched a total of 430 Chinese anime titles and produced 178. Over 340 million users watched Chinese anime on Bilibili, and total viewing hours surpassed 1.9 billion, with a 40% average annual growth rate. 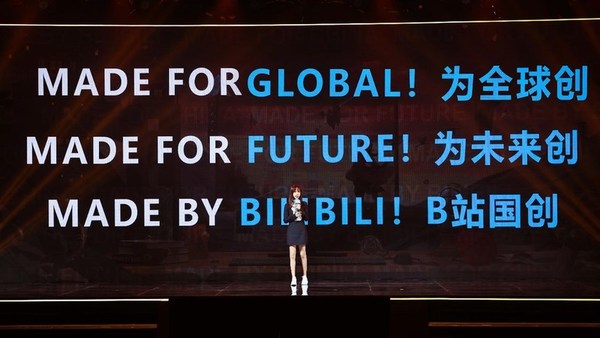 Carly Lee, vice chairwoman of the board of directors and chief operating officer of Bilibili

"Chinese anime will become a mainstream content category of cultural consumption in China, but our goal should not be limited to the domestic market," said Carly Lee, vice chairwoman of the board of directors and chief operating officer of Bilibili. "Anime is the art of imagination, and the love of imagination is shared by humankind. Anime has the ability to cut through cultural and communications barriers. This year, we upgraded our slogan from ‘Made for China‘ into ‘Made for Global’, hoping that Chinese anime will gain popularity around the world."

Bilibili announced in 2019 that it will co-produce an animated version of The Three-Body Problem, the award-winning global phenomenon by China’s most celebrated science fiction author, Liu Cixin. Liu once commented that he believes anime is a particularly suitable form of expression for science fiction content. Bilibili released a new trailer for the title at the conference, further revealing the massive Three-Body Problem universe to long-expectant fans.

Heaven Official’s Blessing, a Bilibili-produced anime adapted from popular Chinese fantasy novels, was the first-ever Chinese anime series to be streamed on Funimation, the leading global streaming platform. The title has also been introduced on NETFLIX. Funimation also launched Link Click, another Bilibili-produced title that captured the hearts of audiences for its touching story. The title ranked as high as #20 on MyAnimeList, the world’s top online anime community and database. First seasons of Heaven Official’s Blessing and Link Click gained 420 million and 180 million views on Bilibili respectively. The second seasons of the two titles will be launched on Bilibili soon.

Both of the titles received positive feedback from international audiences on their art style, storylines and production quality. A viewer commented on Heaven Official’s Blessing, saying, "I have never seen an animation this satisfying! The special effects, the song choice, and even the story is so perfect!" The viewers of Link Click are impressed by the quality of Chinese anime. One said: "This anime blew my mind and changed my whole impression of Chinese animation. I am so happy they are getting better."

By telling the stories and values of Chinese people, Chinese anime can help introduce Chinese history and culture to a wider audience. Working with Shanghai Animation Film Studio, one of the most time-honored animation production studios in China, Bilibili will produce a new title, Yao—Chinese Folktales, which involves eight "monster" (or "yao" in Chinese) related stories originating from Chinese culture. Bilibili will adapt Sword and Fairy 4, a classic gaming and TV drama IP in China, into animation.

Bilibili also announced a sequel to Fog Hill of Five Elements, which involves cultural elements taken from the ancient Chinese text, The Classic of Mountains and Seas. The title attracted many audiences for its special art style that resembles traditional Chinese paintings. The Legend of Princess Chang-Ge, the famous cartoonist Xia Da’s comics set in the Tang Dynasty, will also be adapted into animation.

Some widely popular titles will see their sequels back on Bilibili, such as the third seasons of The Daily Life of The Immortal King and Fairies Albums. Total views of the titles reached over 500 million and 200 million respectively.

Bilibili will continue to adapt high-quality comics into animation to expand and upgrade existing IPs. The company acquired one of China’s largest original comics platforms, U17.com, and will adapt 17 comics from the platform into animation. It will also adapt five additional titles from Bilibili Comics.

To further support industry talents, Bilibili upgraded the "Little Universe Program", which was first launched in 2016, to identify and train animation students and individual anime creators. The upgraded "Light Catcher Initiative" not only covers students and professional anime creators, but also provides opportunities for young, inexperienced anime lovers to enter the industry, and encourages anime-making teams to challenge themselves to produce high-quality works. Some awarded projects from previous years have gone into production under the support of Bilibili.

A video recap of the event and full lineup of the new titles is available here.

Bilibili is an iconic brand and a leading video community with a mission to enrich the everyday life of young generations in China. Bilibili offers a wide array of video-based content with All the Videos You Like as its value proposition. Bilibili builds its community around aspiring users, high-quality content, talented content creators and the strong emotional bond among them. Bilibili pioneered the "bullet chatting" feature, a live commenting function that has transformed the viewing experience by displaying thoughts and feelings of other audience viewing the same video. It has now become the welcoming home of diverse interests for young generations in China and the frontier to promote Chinese culture across the world.