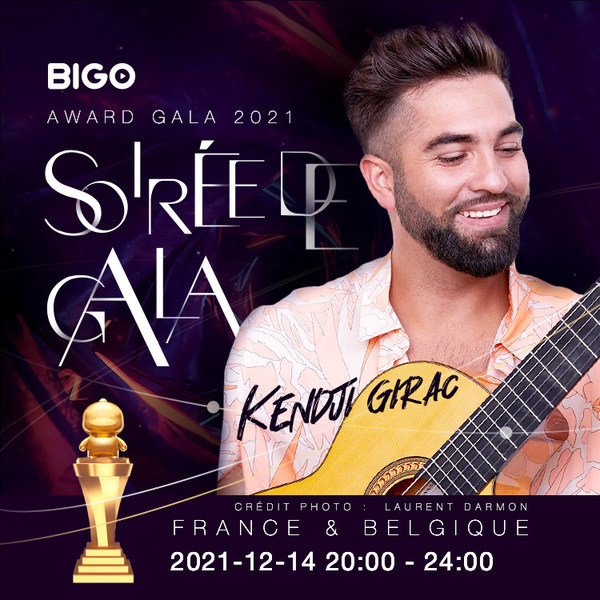 Bigo launches the Soiree de Gala 2021 in France and Belgium

The Soiree de Gala will feature live music concerts and performances by Kendji Girac and featuring ten other top singers, DJs, and dancers. Girac will also host a panel in BIGO’s multi-guest room, which allows fans to connect and interact directly with artists. In addition to this, Bigo will be giving away gifts to new users on the platform participating in the livestream.

Kendji Girac (BIGO ID: 774616547) is one of France’s most famous pop stars, who recently won the "Francophone Song of the Year" at the NRJ Musique Awards with his single "Evidemment (Obviously)". This year, the French magazine "l’Hebdo" ranked him as the most favorite celebrity in France.

"Live streaming allows genuine interaction between artists and viewers, something that we’re looking to channel through Soiree de Gala," said a spokesperson from BIGO. "This is especially relevant when pandemic restrictions are in place. Live stream concerts are a gateway to the virtual world, bridging the gap between physical events and online participation and allowing performers to connect with their fans in real-time," said a spokesperson of Bigo Live.

Bigo Live will also be hosting a music livehouse as a pre-event celebration for fans in Germany, Italy and northern Europe. The "DJ Secret Stage", starting from 12 noon, will feature a 12-hour set by DJ broadcasters across the region, including Dutch DJ Quintino (BIGO ID: Quintinomusic), who was ranked 25 in the 2020 Top 100 DJ list by DJ Magazine. The fan engagement livestream will air on December 16 at 9pm GMT+1 to fans in the region.

Fans and viewers can also participate in the event by posting on BIGO Bar with the hashtag #Kendjisurbigo or #Quintino. The top ten users whose posts garner the most likes will earn 2,100 beans, the app’s virtual currency, or they can get the opportunities to interact directly with celebrities.

Concert live streaming continues to be a popular draw and offers an alternative to in-person events during the COVID-19 pandemic. As of August 2020, 73% of music fans surveyed said they have watched a live stream, with 60% saying they would continue watching live streams even after in-person events returned. Propelled by the live streaming rise, Singapore-based BIGO grew significantly with 400 million active users in over 150 countries. In Q3 2021, the platform achieved a milestone of 31 million average monthly active users (MAU) spanning the United States to Asia, its highest since inception. Globally launched in 2016, the platform entered the French and Belgium market in July 2019 and has seen remarkable growth. Soiree de Gala 2021 demonstrates BIGO’s commitment to facilitating high-quality localized content for users in the region. Viewers interested in joining the upcoming live streaming event can download the app here.

Bigo Live is one of the world’s fastest-growing live streaming social communities where users broadcast in real-time to share life moments, showcase their talents, and interact with people from around the world. Bigo Live has around 400 million users in over 150 countries and is currently the market leader in the live streaming industry. Launched in March 2016, Bigo Live is owned by Singapore-based Bigo Technology.