The Beijing Economic-Technological Development Area, also known as Beijing E-Town, has been ramping up efforts to foster strategically important industrial clusters that represent the latest in the science and technology world. The goal is to build itself into a hub of high-tech industries with international influence. 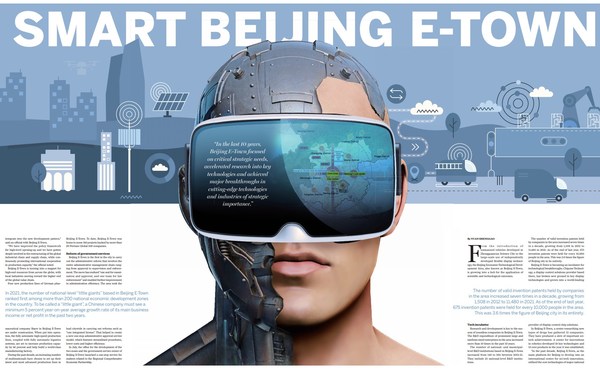 At the opening ceremony of the Beijing 2022 Winter Olympic Games, an 8K ultrahigh-definition ground display system, the largest of its kind in the world, demonstrated the abilities of Chinese technology to viewers across the globe.

"The core technologies of the world’s largest display are in our hands," said a representative of BOE Technology Group, China’s leading liquid crystal display panel maker based in Beijing E-Town.

In 2021, BOE’s LCD shipments for five major application scenarios, which were smartphones, tablets, laptops, monitors and televisions, all ranked first in the world.

Beijing E-Town had been a cradle of innovative products and technologies for the past 10 years. As of the end of 2021, high-tech companies in Beijing E-Town delivered 96.7 percent of the area’s total industrial output value.

In 2021, the number of national-level "little giants" based in Beijing E-Town ranked first among more than 200 national economic development zones in the country. To be called a "little giant", a Chinese company must see a minimum 5 percent year-on-year average growth rate of its main business income or net profit in the past two years.

Beijing E-Town is turning into a magnet for high-end resources from across the globe, with local industries moving toward the higher end of the global value chain.

During the past decade, an increasing number of multinationals have chosen to set up their latest and most advanced production lines in Beijing E-Town. To date, Beijing E-Town was home to some 140 projects backed by more than 90 Fortune Global 500 companies.

Beijing E-Town is the first in the city to carry out the administrative reform that involves the entire administrative management chain ranging from approval to supervision and enforcement. The move has realized "one seal for examination and approval, and one team for law enforcement" and enabled further improvement in administration efficiency.