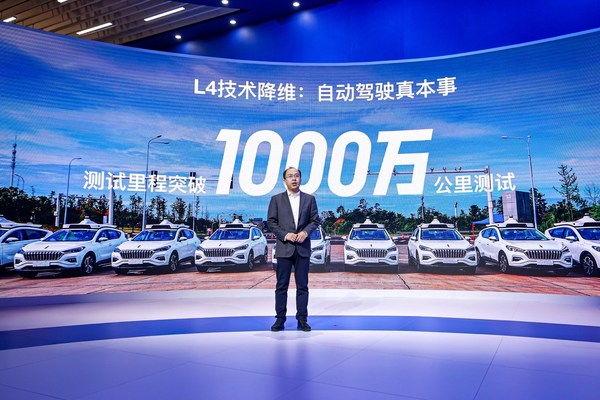 Among the intelligent driving solutions, ANP is a leading navigation pilot product that adopts a pure visual solution and is developed based on the same technology structure of Apollo L4 autonomous technology. Compared with the lidar solutions, ANP’s advantages are its lower cost, mass-production, and self-learning capabilities. Together with the Apollo Valet Parking (AVP) solution that offers an automated parking experience, the intelligent driving solutions allow users to enjoy autonomous driving in real complex urban scenarios in cities including Beijing, Shanghai and Guangzhou. Baidu also plans to bring ANP to urban roads and highways in 20 cities this year and 100 cities by 2023.

One of the mass-produced car models using the Apollo AVP solution is the Weltmeister W6, receiving encouraging response from the industry. Baidu targets to have Apollo’s solutions pre-installed on one million vehicles over the next three-to-five years. In the second half of 2021, the Apollo will come pre-installed with at least one mass-produced car model each month, bringing a safe and cutting-edge autonomous driving experience to more consumers on at least six car models.

Upgrades of Intelligent Cloud Solutions Unveiled at the Auto Show

Under the autonomous driving cloud solution, Apollo will assist partners in developing AI production lines. With the big data cloud solution, Apollo will work with car companies on a closed loop for self-learning in a smart cabin, that will allow carmakers to better understand users and provide them with a customized driving experience. Leveraging Apollo’s experience in safety technology, the car safety cloud solution will support car companies in improving the car safety levels.

At the show, Apollo also announced a strategic collaboration with Chery Automobile based on intelligent cloud. The two companies will work together to provide users with safer intelligent vehicle services.

Zhenyu Li, Senior Corporate Vice President of Baidu and General Manager of Intelligent Driving Group (IDG), announced that the mileage of road testing for L4 autonomous driving has exceeded 10 million kilometers. In addition, Apollo’s autonomous driving simulation test has surpassed one billion kilometers, while high-precision maps have been updated every minute. These achievements demonstrate the solid capabilities of Apollo’s solutions from various perspectives.

This year, Apollo plans to strengthen its team and expand its recruitment. Among the new hires, 90% will be dedicated to research and development. The move will help accelerate the large-scale deployment of Baidu’s Robotaxi business, Apollo GO, and the development of solutions that fit the evolving demand amid the push for commercialization of autonomous driving, that will see increased pre-installation of Apollo solutions in mass-produced vehicles.

Founded in 2000, Baidu’s mission is to make the complicated world simpler through technology. Baidu is a leading AI company with a strong Internet foundation. Baidu’s ADSs trade on the NASDAQ Global Select Market under the symbol "BIDU". Currently, each ADS represents eight Class A ordinary shares.