In today’s world, conventional and inefficient motors are being displaced by high performance motor driving system that is powered by an enhanced driver. Even the internal-combustion engine field is no exception. When it comes to the performance optimization of motor driving system, in addition to the internal characteristics of motor, the embedded driver places an important role in controlling the overall system performance. The microcontroller unit (MCU), as a core component in it, is key to the successful driver design and development.

ARTERY Technology AT32 high performance ARM® Cortex®-M4F MCU embeds a Floating Point Unit (FPU) and operates at a frequency of up to 288 MHz, featuring 512 Kbytes ZW Flash (zero wait-state), three 12-bit 5.33Msps ADCs, count and capture timers based on 32-bit resolution, and patented code protection mechanism. Further to this, its highly competitive prices add to its edge among application markets, making it best suited to motor-driven applications. The company is proud to have this opportunity to share the outstanding features and advantages relating to AT32 MCU here (Figure 1). 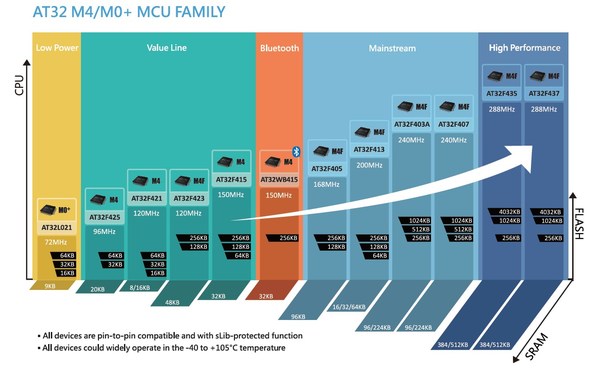 Fast and accurate computing power is a major step to guarantee good motor vector control system. The indicators concerning it include voltage/current vector coordinate transform, position/speed/current control, and rotor pole position estimate in Sensorless mode, among others. AT32 Cortex-M4 MCU with FPU makes it easier to implement these algorithm, thanks to its high-speed computation capability and high precision feature.

As Chinese saying goes, "In the world of Kungfu, speed defines the winner. " AT32 Cortex-M4F MCU operates at a frequency of up to 288 MHz, delivering fast and efficient algorithm capability, compared to other MCU counterparts under the same configuration. This enables AT32 Cortex-M4F MCU to accomplish many high-frequency computing tasks with ease in servo control applications that require the effective control of the changes in current/speed/position of an object, while reserving plenty of features for other auxiliary purposes such as communications.

At the same time, high-speed clock frequency ensures that pulse width modulation (PWM) gives full play to the advantages of high resolution. As the PWM can be employed by a driver to output pulse voltage to change motor current, the PWM resolution is a crucial element to control motor voltage amplitude. By increasing the PWM frequency, it is possible to improve control analysis of voltage phase and to reduce motor current ripple, as shown in Figure 2.

With the same frequency, the higher the PWM resolution, the lower the PWM frequency. The product of the two elements (resolution and frequency) is compared to system frequency, so the PWM resolution and frequency can be taken into account through higher clock frequency. Nothing illustrates this better than the hundreds-of-thousands-of motor driving applications, which require a PWM voltage that is high-resolution and high-frequency to ensure high-speed and stable operation of motor due to the fact that motor speed is fast, current frequency is high and coil inductance is low. 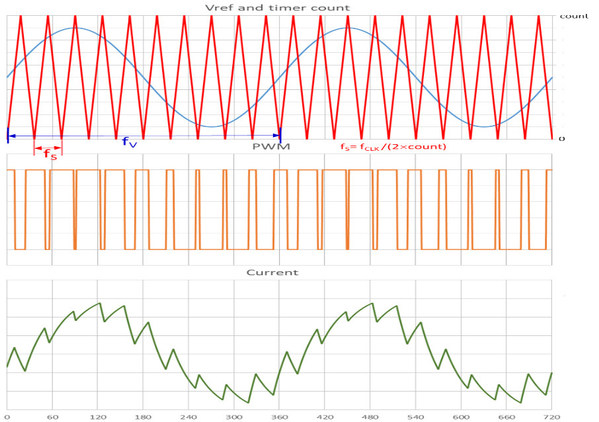 Figure 2. The relationship between PWM signal generation and switching current

Even though the high-frequency MCU runs very fast, the overall execution performance will still be compromised by Flash command fetch speed, under the lack of high-speed memories. One might suggest to move critical programs into SRAM, but such act would cut down SRAM space and make it more complex to run programs. In light of this, AT32 MCU embeds Flash flexible mapping feature as shown in Figure 3. The MCU, once started, will automatically move Flash data from the mapped area to the ZW (zero wait-state) memory block, which contains up to 512 Kbytes of ZW Flash. The perfect combination of Cortex-M4F core, 288 MHz max frequency and ZW Flash leads to powerful MCU performance. For the cost-effective MCU series without ZW Flash feature, their pre-fetch and catch buffer architecture and operating mechanism have been greatly optimized to ensure that they can behave as the same way that ZW Flash runs in most cases.

Motor control applications require real-time detection of the current state of motor in order to achieve high-speed current loop control operation, especially when a single-resistor current is being sampled, it is mandatory to read current feedback signal in very little time (<1us) to avoid noises, as shown in Figure 4. Similarly, for sensorless control applications, it is also required to monitor DC BUS voltage or motor voltage at any one time. All this points to a high-speed ADC peripheral as a solution. Besides, 12-bit ADC is also helpful in obtaining high-resolution information about current and voltage because of its excellent resolution capability and reasonable price. In response, AT32 MCU embeds a 12-bit ADC up to 5.33MHz, and 24 external channels to meet the signal sampling requirements relative to motor control.

In terms of servo controller applications, it is common to use more than 20-bit resolution encoder to achieve a wider high and low speed control range and accurate speed and positioning. This means that MCU needs to be equipped with 32-bit timer, in which an encoder signal can be processed by fourfold frequency multiplication. Besides, for low-cost applications that use Hall components to monitor rotor position of motor, they are confined to the counting range of 16-bit capture timer and low-speed run mode, so the frequency of timers must be divided accordingly, which would in turn compromise the speed resolution of motor in high speed mode. In view of this, AT32 MCU embeds two 32-bit resolution count and capture timers to meet the requirements of high-end servo controllers and low-cost drivers.

As motor driving system is widely used in a variety of application fields, its communication interfaces become more and more rich and diversified in response to different communication requirements. AT32 MCU embeds multiple UART, CAN, I2C, SPI and USB interfaces to adapt to user needs. Among them, AT32WB415 series, based on Bluetooth Low Energy (BLE) 5.0 technology, is regarded as a wireless communication MCU that integrates blue RF transreceiver and baseband, delivering best solutions to IoT applications.

As an increasing number of peripherals are used in motor drivers that need to be processed in real time, the use of DMA channels becomes a means to update data at a given area in real time. However, this would cause DMA channel conflict because a large number of MCU peripherals have to be served by DMA. In consideration of this dilemma, AT32 MCU is designed to contain flexible DMA channel mapping feature, which gives greater flexibility in DMA channel configuration, for instance, mapping a DMA request channel of a certain peripheral to any one of the 22 channels that belong to three DMA controllers.

AT32 MCU offers multi-level security measures, which includes read protection (RDP), random number Flash programming and sLib (security library). AT32 MCU, for instance, embeds a Security Library (sLib) developed by ARTERY, allowing users to program any part of the internal Flash memory protected by such mechanism. This security library is code-executable but non-readable, making it more secure for solution providers to write core algorithm in it, but also be more convenient for them to carry out second-level development. While programming the external SPI NOR Flash through MCU, the programs and data in this security area are scrambled and encrypted by internal hardware to achieve comprehensive code protection.

Choosing an MCU requires consideration of both performance and functions as well as prices. AT32 MCU family is based on Cortex®-M and M0+ core. Some of M4 core MCUs are almost equal to M0+ MCU in terms of prices, representing strong price competitiveness among the whole MCU industry while providing high-quality motor driving solutions.

Artery Technology is a professional creator and maker of 32-bit MCU founded in 2016. Since its establishment, ARTERY has been devoted to the innovation-driven development of 32-bit microcontrollers across the globe. With best-in-class technology, complete silicon IPs and excellent integration features, ARTERY has created up to 288 MHz ARM Cortex-M4 MCU. As the Internet of Things and smart manufacturing become more and more popular, and the demand for high-performance MCUs from end application market is growing. ARTERY will continue to focus on the research and development of more powerful and more efficient MCU that can cover diverse aspects of modern applications ranging from 5G, Internet of Things, consumer, business and industrial control.  https://www.arterychip.com