PARIS, Dec. 8, 2020 /PRNewswire/ — The world’s two leading auction houses have historically moved neck and neck, but online sales have allowed Sotheby’s to gain a substantial advance over its rival. For the first 11 months of 2020, Sotheby’s, now headed by Patrick Drahi, has a turnover lead of +40%. Such a wide gap hasn’t been seen since 2004. 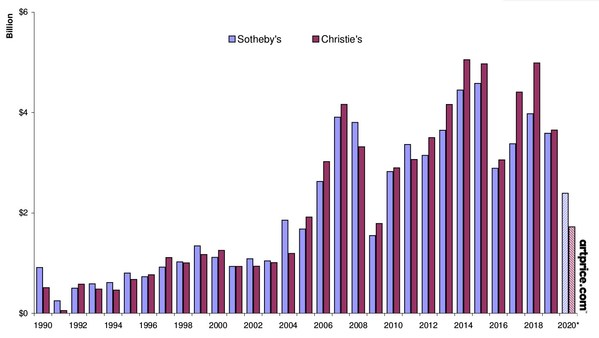 "The global supremacy of Sotheby’s and Christie’s on the international art market should not make us forget that the two houses only handle 6% of the fine art lots offered at auction," recalls thierry Ehrmann, President and Founder of Artmarket.com and its Artprice department. "The two houses have however acquired a virtual monopoly on results above $20 million in the West. Their rivalry is historic and has been reflected in the closely correlated development of their respective revenues over the past 30 years."

A correlation that raised eyebrows…

The year 2000 was marked by the end of an ‘agreement’ between the two companies, accused by their customers of having engaged in "unfair commercial practices" by illicitly harmonising their buyers’ fees. They both agreed to pay $256 million each to avoid a damaging trial and Sotheby’s separated from its CEO at the time, Alfred Taubman.

Despite this ‘agreement not to agree’, the operating incomes of the two companies continued to progress along very similar curves – although completely independently due to the ‘warning’ in 2000 – for another three years.

Sotheby’s 2004 turnover was not only boosted by fetching the very first fine art result above the $100 million threshold (for Pablo Picasso’s Garçon à la pipe (1905)), but also by hammering 9 of the 10 best fine art results of the year. This resulted in a global turnover figure 1.5 times higher than Christie’s, despite a slightly lower number of sales.

Between 2013 and 2018 François Pinault’s firm managed to beat Sotheby’s annual total  for six consecutive years. Sotheby’s reacted with a series of strategic shifts including stepping up its price guarantee policy and dropping buyer fees on online sales. However, the NYSE-listed company seemed to be gradually falling behind.

Then, as rumours circulated about a possible takeover by the Chinese insurer Taikang (its largest shareholder and owner of Poly Auction), Sotheby’s was acquired by Patrick Drahi, a Franco-Israeli telecoms tycoon. The Covid-19 pandemic was bad news for business for everyone, but Sotheby’s was the quickest to react by intensifying its Online Only sales and by setting up exceptional closed-door sessions.

The editorial in Le Monde of Friday 4 December 2020 summed it up perfectly: "Like a time-machine, the health crisis seems resembles a medieval phenomenon, but in many respects it has projected us into the future. Expert predictions about the development of a ‘dematerialized society’ […] often gave 2025 as their horizon, but a lot of these predictions have come to pass in less than a year."

Artmarket is a global player in the Art Market with, among other structures, its Artprice department, world leader in the accumulation, management and exploitation of historical and current art market information in databanks containing over 30 million indices and auction results, covering more than 744,000 artists.