To meet the demand for low development budget, Artery launched AT32F421 value-line Cortex®-M4 MCUs at a comparable price to Cortex®-M0. Since its official release in September 2020, this series of MCUs have earned great reputation and have been widely applied in fields such as motor control, industrial automation, IoT and consumer electronics.

The AT32F4212 inherits excellent performance of AT32F421, featuring up to 120 MHz CPU, high-speed embedded memory (up to 64 KB Flash and 16 KB SRAM) and built-in digital signal processor (DSP). It is the most cost-effective MCU product in the current market, and can be used at an operating temperature of -40~105°C with 2.4~3.6 V power supply, meeting the requirements of low power applications in low-power modes. 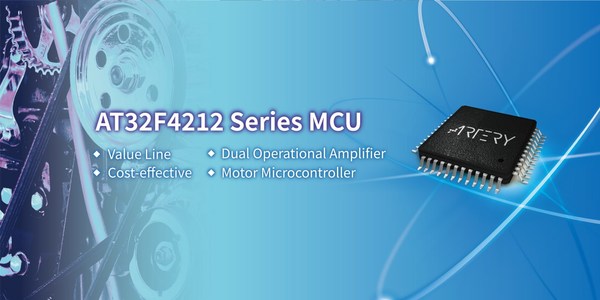 Artery AT32F4212 series MCUs are designed to improve and replace traditional Cortex®-M0/M3 product solutions, import Cortex®-M4-based high-speed mainstream platform and contain a security library (sLib) which is developed by ARTERY Technology and is a defined area protected by a code in the main memory. Solution providers can program core algorithm into this area for secondary development. It strengthens the safety, reliability and convenience of secondary development of AT32F4212 series MCUs, and has advantages of low cost, high energy efficiency and flexibility. The AT32F4212 series MCUs comes in LQFP48 7×7 package, and samples are available from October 2022.