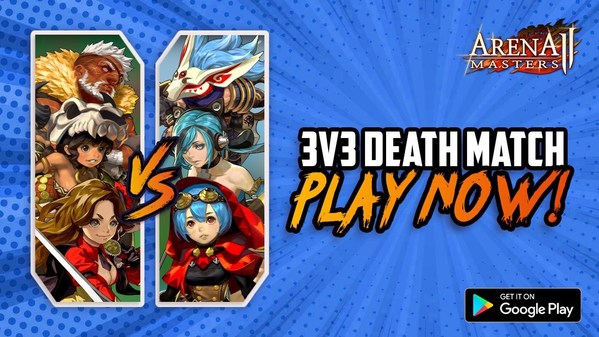 In this esports game, players will compete with others. Also, it takes skills from the players themselves to win a game. So, there’s no "Pay to Win" because Arena Master 2 focuses more on the PvP battle.

Arena Master 2 is recommended to all ages because very simple, easy to play and it has great gameplay. This game has 3 different game modes, Team Deathmatch, Duel, and Officers and Outlaws mode.

In Team Deathmatch Mode, players are divided into 2 groups, each consists of 3 players. The winners will be determined on the kill points gained by the players in the team.

To win the game, Officers will have to capture the entire member of the Outlaws within a limited time. While the Outlaws have to remain unseen, get away from the Officers and try to not get caught.

Well, Arena Master 2 also has various kinds of heroes that players can use. Each hero in this game certainly comes with their own unique skills and abilities. Players will control a character in the game using joystick or analog.

Players can also collect numerous trophies from every victory on the battlefield. Even if players reach a certain number of trophies, players will get free items including unlocking new heroes in the game.

Arena Master 2 uses crystal for its in-game transactions, and players can get those crystals by top ups. So, for Android users who want to try this game, they can download the game on Google Play Store.

For those who want to know more about this game, please follow Instagram Arena Master 2 to keep updated about this PvP game.