TOKYO, May 18, 2021 /PRNewswire/ — KLab Inc., a leader in online mobile games, announced that their new multimedia music project "aoppella!?" will premiere the second part of its a cappella J-Pop cover songs including "Neko" by DISH// and "Tentai Kansoku" by BUMP OF CHICKEN Tuesday, May 18. See original press release (https://www.klab.com/en/press/release/2021/0518/aoppella_songs.html) for full details. 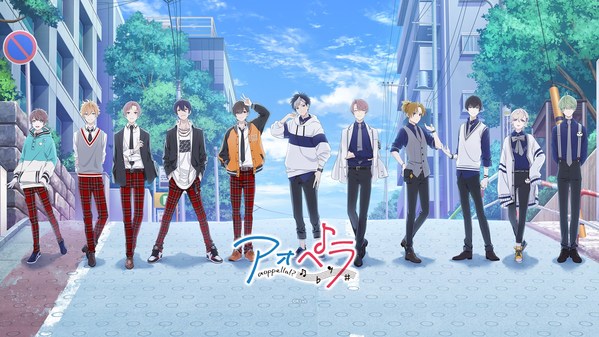 Multimedia music project "aoppella!?" will premiere the second part of its a cappella J-Pop cover songs including "Neko" by DISH// and "Tentai Kansoku" by BUMP OF CHICKEN on Tuesday, May 18. Also announced was the digital worldwide release of original songs "Playlist" and "Think About U" along with new original songs, CDs, merchandise, and more. Fans can get the first "aoppella!?" wallpaper by checking out the official Twitter!

The new cover songs were originally announced by cast voice actors during the livestream yesterday, Monday, May 17. The "CD Release Countdown Livestream" featuring Ryohei Kimura, KENN, Shugo Nakamura, and Daiki Hamano was held in commemoration of the first CD release on Friday, May 21. The video will be archived on the official YouTube channel until Monday, May 24th JST (TUC+9) so check it out before it’s gone.

In addition, other announcements included new original songs, CDs, merchandise, and more. Details will be gradually announced so be sure to check out the future development on the official social media.

"aoppella!?" is KLab’s latest original multimedia music project built on the themes of "youth" and "a cappella"! The "aoppella!?" project began on March 4, 2021 with the J-Pop cover medley of "Hakujitsu / Pretender" and surpassed the 1 million view mark (currently 2.74 million views) in just one week.

*All other trademarks or registered trademarks are the property of their respective owners.