SINGAPORE, Aug.9, 2021 /PRNewswire/ — Enterprise Asia, the organiser of the prestigious fifteenth Asia Pacific Enterprise Awards (APEA) 2021 Regional Edition is pleased to recognise 59 exceptional award recipients who have exemplified excellence and perseverance in this unprecedented period. The APEA awardees have proven resiliency and accelerated tremendously to overcome the unprecedented economic conditions wrought by the global pandemic. 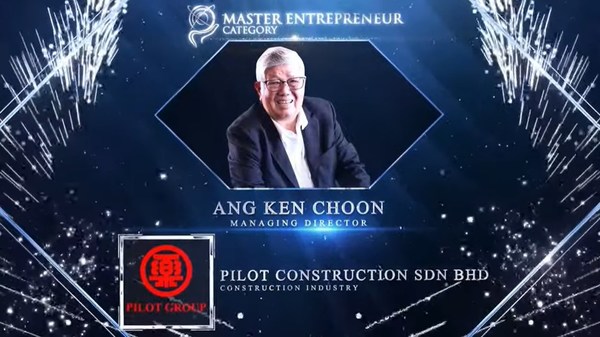 The APEA, an initiative by Enterprise Asia, the region’s leading NGO, is the largest regional recognition and acknowledgement programme for trailblazers in the business community. APEA prides itself as a testament to the commitment, aspiration, and true entrepreneurship. With over 800 nominations received each year, and about seven percent were commended to the most deserving for recognition. This year, an impressive number of 130 finalists from 15 countries were up for consideration in the final round of judging and only 59 were crowned as award recipients.

Sitting down with Ang Ken Choon with his soft-spoken manner and grandfatherly looks, one cannot help but feel his genuine interest to guide anyone who asks for his help. His warm smile and white hair hide a determined spirit that made him an entrepreneur.

Hailing from Kuala Langat in Selangor, Malaysia, Ang’s background is similar to many young men in the 1950s and 1960s. At a time when Malaysia‘ economy was in its infant stage, many relied on physical skills to develop a business and Ang was no different. Despite having attended only primary school, Ang decided to take on a slightly different route rather than depend on labour intensive opportunities. He started a small business trading in domestic and commercial furniture in 1968 that was the seed that planted the journey of Pilot Construction Sdn Bhd.

In the 1970’s, Malaysia was seeing a steady influx of Japanese multi nationals who have chosen the country as an ideal manufacturing hub. Not wasting an opportunity despite language and communication barriers, Ang started offering his services to supply quality commercial furniture to these businesses which eventually expanded to customised furniture and renovation works.

In the last 42 years, Pilot Construction’s growth is one driven by listening to their customers. Professionalism and taking responsibilities seriously were something that Ang learned from his customers. A systematic approach with smart time management made delivery on time an achievable goal and this in turn gave Pilot its credibility.

"It is the actions you do that will make your customers trust you". Ang shared, "Our customers were seeing what we were doing physically and how we were working hard to help them".

Ang’s ability to instil the right culture in his team is the reason why Pilot Construction has been able to grow. In the early 1980’s, his earnest efforts paved the way to even bigger success. The company name become one synonymous to quality work which opened doors for Pilot to be appointed by many Japanese multi nationals as a main contractor. Throughout the 1980’s and 1990’s, the scale of projects awarded kept growing and Pilot became the "go to" construction firm for international Japanese companies with values of RM50 million in 1980’s to today’s figure of RM180 million.

From building factories of stringent demands for customers such as Micron, SanDisk and Western Digital today to hypermarkets of every brand in Malaysia, Pilot has maintained a high standard of safety, quality and efficiency. A familiar name in the winners lists of Malaysian Occupational Safety & Health Professional’s Association Excellence award (MOSHPA), Mr Ang believes in safety and ensures that the company prioritizes safety over profit.

Ang believes that companies should always consider breaking out of their comfort zone. He is an advocate of self-improvement and believes in embracing technology as the way forward. Even after the company’s successes in building manufacturing facilities and hypermarkets, Ang led the company into a new realm with the construction of the latest landmark in Penang – The Penang Design Village.

Pilot’s Vision is to establish its position as a leading and trusted construction company with Added Value Construction Solutions. Ang has laid down a mission to achieve that vision in 2025 by maintaining a professional attitude, embracing Innovation, guiding with clear and good leadership to ensure operational excellence, while upholding trust and integrity. Pilot believes in achieving Zero – Zero Loss Making, Zero Accident, Zero Environmental Incidents and Zero Defects.

For Pilot Construction Sdn Bhd, the next stage in their pursuit in fulfilling their vision would be looking into the expansion of their services into neighbouring markets. Their experiences and knowledge give them excellent project management skills, coupled with well trained staff that understand and work with the values that Ang has nurtured deep into the working culture of Pilot.

A humble gentleman to the end, who now takes time off to golf competitively locally and abroad, Ang imparts this advice, "The level of education doesn’t determine one’s success, but hard work and integrity does. If you remain honest, you will find that your journey is a blessed one with customers who will be there to help you along the way".

Enterprise Asia is a non-governmental organisation in pursuit of creating an Asia that is rich in entrepreneurship as an engine towards sustainable and progressive economic and social development within a world of economic equality. Its two pillars of existence are investment in people and responsible entrepreneurship. Enterprise Asia works with governments, NGOs and other organisations to promote competitiveness and entrepreneurial development, in uplifting the economic status of people across Asia and in ensuring a legacy of hope, innovation and courage for the future generation. For further information, visit www.enterpriseasia.org.

Launched in 2007, the Asia Pacific Enterprise Awards is the region’s most prestigious awards for outstanding entrepreneurship, continuous innovation and sustainable leadership. The Award provides a platform for companies and governments to recognise entrepreneurial excellence, hence spurring greater innovation, fair business practices and growth in entrepreneurship. As a regional award, it groups together leading entrepreneurs as a powerful voice for entrepreneurship and serves as a by-invitation only networking powerhouse. The program has grown to encompass 14 countries and markets all over Asia. For more information, visit: www.apea.asia