AXP formed a Joint Venture with Newtak in 2010 to acquire and operate the leases with revenue being equally shared after costs and royalty payments. Under the terms of this agreement, AXP will acquire Newtak’s 50% membership interest for total cash consideration of US$50,000 with the transaction scheduled to close by end November 2021.

Kentucky Exploration, LLC holds extensive acreage in the Illinois Basin covering a portfolio of 44 conventional oil wells which currently deliver only modest daily production, as they have not been a focus for AXP. A workover program developed by the operations team in Lexington is now underway and production is already returning to some wells that have not produced for a number of years. Workovers are continuing.

As well, the Dacy Lease (part of Kentucky Exploration) has been earmarked as a priority target for drilling new low-cost vertical wells to be undertaken by AXP’s recently formed drilling division.  As reported on 4 November, the Company will shortly commence a 4 + 4 well back-to-back drill program across 4 leases in the Illinois Basin.

Through a combination of workovers and drilling new low-cost conventional oil wells, the Company believes these leases can, in time, make a meaningful contribution to AXP’s growing oil production base.

AXP’s Chief Executive Officer Tim Hart said: "The Kentucky Exploration leases are proven oil producing fields and we have identified some compelling low-cost conventional targets. As well, a number of the wells are candidates for more extensive workovers to enhance production and work is underway. This low-cost, opportunistic acquisition of an asset we know well is further evidence of our ability to identify quality conventional oil and gas assets and add value quickly. We look forward to providing an update on the workovers and the early production gains."

AXP’s portfolio of ~1,460 wells are now all 100% owned by the Company with many still under-producing. Of the ~276 earmarked for abandonment or under review, a number of these have been identified for re-purposing and workovers which will enhance production. 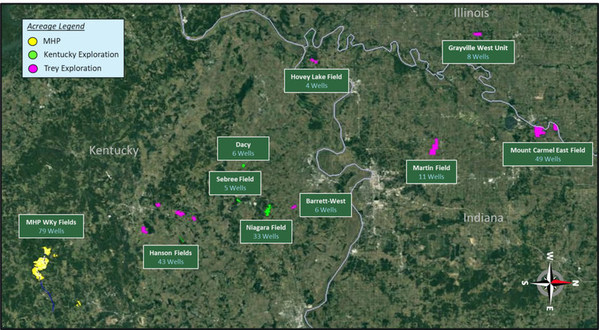 This announcement has been authorised by the Board of AXP Energy Limited.

AXP ENERGY Limited (ASX: AXP) (formerly Fremont Petroleum Corporation Limited) is an oil & gas production and development company with operations in Colorado, Illinois, Kentucky, Tennessee and Virginia. AXP’s focus is to aggressively grow daily production by improving current asset performance and opportunistically acquiring onshore USA oil & gas assets with the following characteristics: producing conventional oil & gas wells; production that can be enhanced through low-cost field operations and workovers; leases which are held by production and which do not require ongoing drilling commitments; and economies of scale which can be achieved by acquiring and carrying out similar enhancement strategies on contiguous or nearby fields with similar characteristics.

This announcement contains or may contain "forward looking statements" within the meaning of Section 27A of the Securities Act of1933 and Section 21B of the Securities Exchange Act of 1934. Any statements that express or involve discussions with respect to predictions, expectations, beliefs, plans, projections, objectives, goals, assumptions or future events or performance are not statements of historical fact and may be "forward looking statements." Forward looking statements are based on expectations, estimates and projections at the time the statements are made that involve a number of risks and uncertainties which could cause actual results or events to differ materially from those presently anticipated. Forward looking statements in this action may be identified through the use of words such as "expects", "will," "anticipates," "estimates," "believes," or statements indicating certain actions "may," "could," or "might" occur. Hydrocarbon production rates fluctuate over time due to reservoir pressures, depletion, down time for maintenance and other factors. The Company does not represent that quoted hydrocarbon production rates will continue indefinitely.