Players Can Prepare for the New Update with Special Events, Growth Items and More

LOS ANGELES, April 8, 2022 /PRNewswire/ — Netmarble, a leading developer and publisher of mobile games, has announced the integration of the MARBLEX Wallet DEX Service to its dark fantasy open world mobile RPG A3: Still Alive as part of the update coming in April. To celebrate the addition of the MARBLEX Wallet DEX Service, which completes the game’s global blockchain ecosystem, new events and growth items are now available in the game. 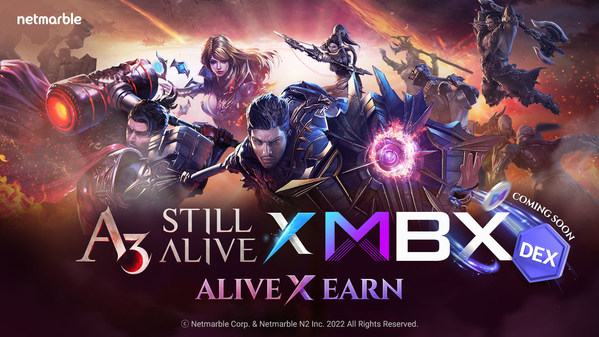 The application of the MARBLEX Wallet DEX Service feature to A3: Still Alive will allow players to convert the Inetrion Ore, which is in-game currency into INETRIUM, MBX Link, and MBX, as well as convert to other public currencies for real life transactions. In line with its "Alive X Earn" slogan, the update will bring the game to a whole new level for players, with INETRIUM’s expanded use abilities securing its value.

Special in-game events and items are also available now to celebrate the upcoming integration of the MARBLEX Wallet DEX Service as players prepare to enter the Inetrion Dungeon later this month. These include:

As the upcoming first-ever airdrop event for A3: Still Alive during the month of April, there was a recent AMA with BeInCrypto and A3: Still Alive that drew major attention from fans and discussed all the details around the game’s blockchain ecosystem. A second AMA will take place in mid-April to share the latest updates, so fans are urged to stay tuned, as more information on the next AMA will be available here in the coming days.

Set in an apocalyptic fantasy world of swords and sorcery, A3: Still Alive is a cross-genre mobile experience that pairs the enormous and living worlds of Open-World RPGs with the extreme combat of Battle Royale. Players must be vigilant in an always-open Player vs. Player (PvP) environment as they fight against enemies with intense hack & slash combat and prove their mettle in a variety of PvP and Player vs. Environment (PvE) modes. A3: Still Alive is beautifully rendered with splendid console-quality 3D graphics that are brought to life thanks to the outstanding optimization of the Unity Engine.