SEOUL, South Korea, Oct. 27, 2022 /PRNewswire/ — Mobizen Studio, a web-based live streaming software, has officially launched. To celebrate the official launch, users signing up to Mobizen will be able to use the paid version free-of-charge for 2 months.

Mobizen Studio is the easiest way to broadcast live streams from a browser to multiple platforms. By accessing Mobizen Studio on laptops or desktops with smartphones, users can create professional videos and stream directly to YouTube, Twitch, and other channels.

The base version of Mobizen Studio is completely free; users are able to enjoy many easy-to-use features including beautifully designed scene templates, live chat, live draw, and etc. Anyone who wants to get started with live streaming and knows nothing about will find the right start with Mobizen Studio.

Mobizen Studio had gone by Remote Studio for beta service over a year. Along with the official launch, however, RSUPPORT Co., Ltd. renamed it into Mobizen Studio in order to rebrand its Mobizen as a comprehensive streaming software. Under the newly rebranded Mobizen umbrella, 8.1 million users of Mobizen Screen Recorder are now able to live stream in a super simple way.

Users who sign up to Mobizen by the end of the year will be able to enjoy the standard program, a paid version, free-of-charge for 2 months. Details of the launch promotion can be found on the Mobizen website(www.mobizen.com). 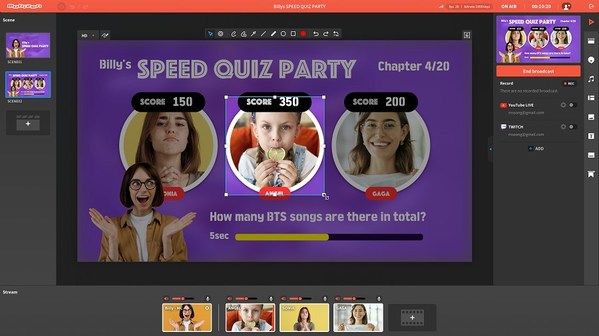 About RSUPPORT Co., Ltd
Founded in 2001, RSUPPORT Co., Ltd has been one of the pioneers and led the global remote solution industry. RSUPPORT develops and delivers rapid and reliable remote services for consumers, small and medium businesses, and enterprises worldwide. Based on its advanced remote technologies and accumulated know-how, RSUPPORT provides a comprehensive lineup of remote solutions: RemoteMeeting for video conferencing, RemoteView for remote access and control, and RemoteCall for remote troubleshooting and support. In terms of digitalization of lifestyle in the digital era, RSUPPORT has been dedicated to provide more than 8.1 million individual users with a better digital experience with Mobizen. RSUPPORT delivers its outstanding remote services for more than 10,000 customers worldwide in various industries, including PC and mobile device manufacturers, telecommunications companies, financial companies, etc. That is how RSUPPORT has firmly established its market position and manages sales partners in many countries worldwide.