The 2021 Korea Basic Income Fair, the world’s largest venue for public discussions on basic income, attracted more than 600,000 online and offline visitors before ending its three-day program on April 30.

SUWON, South Korea, May 4, 2021 /PRNewswire/ — Held under the theme of "Humans Humanely, Basic Income" and organized by the Gyeonggi Provincial Government, the 2021 Korea Basic Income Fair successfully concluded its three-day program on April 30. 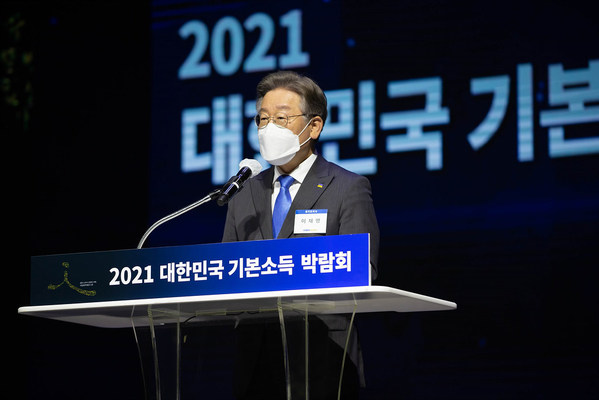 This year’s fair was held both online and offline in accordance with COVID-19 social distancing guidelines. Approximately 600,000 people visited the fair’s international conference, its offline and online exhibition halls, and the official website.

During the opening ceremony, 53 local governments, including the Gyeonggi Provincial Government, joined the inaugural meeting of the Local Government Council on Basic Income and selected Ulsan’s Ulju Mayor Lee Sun-ho as the first chairperson of the Council. The Council declared its commitment to publicly discuss the local government-level basic income initiative so as to institutionalize and expand it nationwide.

The International Conference on Basic Income was live-streamed on the fair’s official Webpage (basicincomefair.gg.go.kr) and YouTube for two days from April 28 to 29 on the topic of "From the COVID-19 Disaster to New Great Transition, Basic Income".

68 scholars and experts from Korea and abroad participated in the conference as speakers to discuss basic income and local currency policies. The speakers included Sarath Davala, President of the Basic Income Earth Network (BIEN), and Joseph E. Stiglitz, a professor at Columbia University and a 2001 Nobel Prize-winning economist.

The 2021 Fair opened a 3D virtual exhibition so that visitors could learn more about basic income and local currency through videos, e-books, and other online materials.

Kim Jae-yong, Chief of Policy Commitment at the Gyeonggi Provincial Government, said, "More and more people are becoming interested in this annual fair. We will make an effort to expand various basic income policies and models discussed at the international conference."