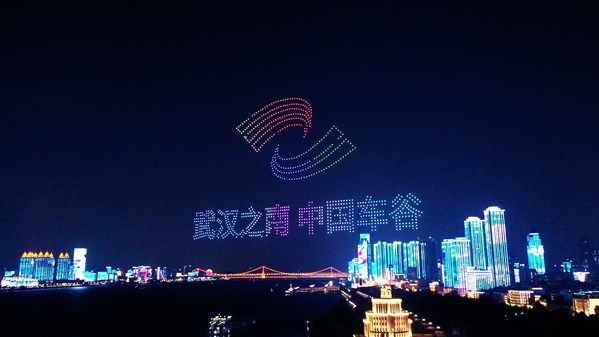 The opening performance at the Yellow Crane Tower, the light show along two rivers, the performance of 1,000 drones and other highlights were staged in turn. The landmarks of Shanghai, Nanjing, Chongqing and Changsha put on light shows in synchronization, which vividly illustrates the legendary story of Wuhan Economic & Technological Development Zone (WHDZ)’s transition from a manufacturing hub to a smart manufacturing high ground, according to the Publicity Department of WHDZ.

The whole event began with the opening show at the Yellow Crane Tower. A lighted ancient map opened the splendid civilization along the Zhuan River. The historical scenes of trail-blazing production, roaring machinery and rolling wheels were reproduced in turn. Accompanied by melodious music, the reciting actors told the legendary stories of pioneering generations’ hard work.

After that performance, a new energy vehicle drove from a virtual intelligent factory and led the audience to wander through history from the perspective of unmanned vehicles, witnessing the magnificent transformation of the WHDZ from a barren slope to a modern new city.

The "Yellow Crane" and the China Auto Valley move from manufacturing to smart manufacturing in the dialogue between the ancient and the modern.

This year marks the 30th anniversary of WHDZ’s establishment. Thirty years ago, China Auto Valley started from Zhuan Kou with a mission to help turn China into a manufacturing power.

Today, 30 years later, China Auto Valley is starting from Junshan for a second venture, and promoting new development drivers with scientific and technological innovation. A new blueprint for high-quality development has been written in the zone’s transition to a smart manufacturing center.

Efforts will be made to promote the linkage between smart city infrastructure and intelligent networked automobiles, and the coordination between digital industrialization and industrial digitalization. The zone will cultivate and expand new economies and improve governance to write a new chapter in high-quality development, according to Liu.