GUANGZHOU, China, Nov. 10, 2021 /PRNewswire/ — XAG, the trailblazers of agriculture robotics and AI, has geared up to launch its V40 and P40 Agricultural Drone globally, bringing digital agriculture into more rural areas with aging population and weak infrastructure. The XAG V40 and P40 are fully autonomous drones that can conduct mapping, spraying, and broadcast on farm. They are designed in supporting farmers’ transition to climate smart practices, driving greater growth with lower carbon footprints and less agrochemical. 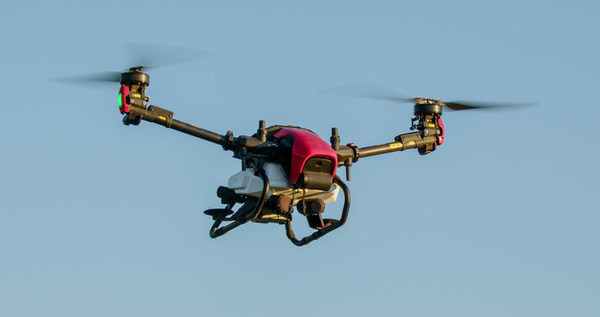 XAG V40 Agricultural Drone operated with broadcast system on board

The V40, as the flagship model of XAG V Series Agricultural Drone, is a milestone of getting farmers connected to the digital age easier than ever. It is the first tilting twin-rotor unmanned flying platform of its kind in agriculture to find the right balance between precision, performance, and efficiency. With a 16-litre liquid tank and a 25-litre granular container, the XAG V40 elevates the maximum flow rate of its spray system at 10L/min and can spread up to 40kg seeds or fertilisers in one minute.

Adopting the aluminium alloy materials, XAG P40 is an updated model of the classic P Series agricultural drone that is more compact, flexible, and easy to transport. On board with a 20-litre liquid tank, its spray width can reach 6 meters and covers up to 13 hectares farmland per hour. After switching into the broadcast system, the capacity of P40 is increased to 25 litres with the spreading width extended to 10 meters.

This October, XAG V40 Agricultural Drone earned the G Mark Good Design Award, one of the world’s top 4 renowned industrial design awards, for its innovation on helping to ease the burden of farmers and protect them from harmful agrochemicals. The design of the V40 embodies XAG’s understanding of agriculture, farmers, and society.

Owing to its twin-rotor structure, the V40 has a more concentrated wind field that contributes to an effective spray width up to 10 metres. With multiple aerodynamic optimisations, its spray penetration is over twice that of traditional multi-rotor drone, making drops penetrate more precisely into dense crop canopies. This provides stronger protection against weeds, diseases, and insect pests to close the yield gap.

The V40’s arms and propellers can fold over doubly, which reduces handling volume by one third and thus effectively saves space to allow easy transportation. The bionic design, by mimicking the posture and movements of a bird, improves the drone’s agility in different operating scenarios, such as orchards, terraces, and open fields.

Both V40 and P40 Agricultural Drone are built with highly modular design that unlocks their three-in-one functions. They can go with three different task systems – XAG RevoSpray, RevoCast, and RealTerra system, which allows farmers to use the same platforms for collecting digital field map, sowing seeds, and controlling crop diseases. Using one drone for multiple applications can significantly reduce the barriers of farmers to embrace digital agriculture.

Traditionally, pesticides are used to be sprayed aimlessly over a large area by knapsack sprayers, tractors, or aeroplane, which often leads to chemical overuse and waste of water.

For the first time, XAG RealTerra system enables an agricultural drone to have rapid mapping capability. It can shoot, map, and analyse farmland images autonomously. After collecting the 3D digital field maps on crop growth, the V40 and P40 can be rapidly switched into the RevoSpray or RevoCast system to carry out variable-rate operations. This means that sprays can be precisely targeted on where it is needed to cut down the use of pesticides and fertilisers.

The SuperX 4 Intelligent Control System empowers the V40 and P40 with the ability of high-accuracy navigation and automatic route planning. Based on the leading dual-engine RTK centimetre-level positioning modules, the drone can operate accurately on the predetermined flight route to free farmers’ hands.

Implementing a safety focus on autonomous flight, the V40 and P40 are equipped with a multi-directional radar matrix that features front dynamic radar and terrain radar. The radar systems can perceive the surrounding areas and avoid obstacles to make farmland a safer workplace.

Both V40 and P40 can be easily operated via the newly upgraded XAG One APP. They are designed for digital farming and can be directly connected to a smart phone. All operations from farmland mapping to crop protection can be completed with a few clicks. From following a straight path, targeting on single spots to using a handheld remote controller for smaller plots, XAG has designed four operation modes to meet the needs of different farm types.

The whole body of XAG V40 and P40 has an IP67 rating protection to give them longer service life in harsh environment. While waterproof and dust-resistant, they can also withstand corrosion damage caused by chemical. Farmers and drone pilots can wash them directly by rinse of water. Moreover, these drones are powered by the smart lithium polymer battery, which only takes 11 minutes to fully charged in the water-cooling tank. Shortening the charging time can reduce the number of batteries needed and therefore lower the operating costs.

Founded in 2007, XAG is a leading robotics and AI company, as well as one of the world’s largest agricultural drone maker. With the mission of advancing agriculture, it focuses on using technology to empower agriculture and help create a food-secure future. Up to December 2020, XAG’s smart agriculture technologies and solutions have reached 42 countries and regions, serving 9.31 million farmers and 52 million hectares of farmlands.