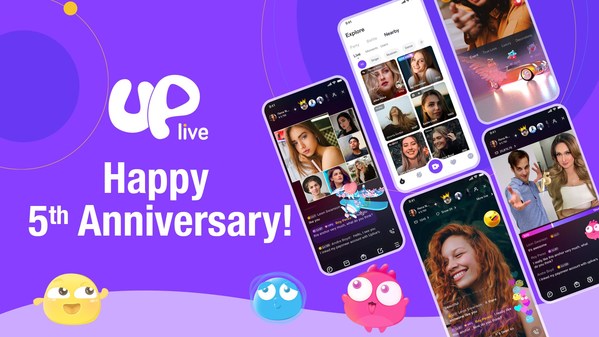 During pandemic lockdowns, Uplive introduced a platform for musicians to perform via live stream, meeting a unique need in the industry. Over the past year, live streaming musical performances have become the most popular content vertical on the app. Uplive’s annual online singing contest, Singing for the World, helped over 4,000 singers worldwide compete by producing new content and growing their fanbase even when in person concerts were cancelled.  The 2020 edition of Singing for the World featured Paula Abdul as a judge and mentor.

"This past year our team met the challenges of the pandemic head-on and provided innovative new features during a time of global isolation," said Andy Tian, CEO of AIG. "I’m particularly proud of how the Uplive community empowered and supported streamers amidst a global economic crisis. This year, we celebrate more than Uplive’s fifth anniversary and tremendous growth; we celebrate the vibrant community that Uplive has become."

Since its launch, Uplive has also empowered users around the world to earn an income while showcasing their talents. After Uplive opened Brazil as a new market during the pandemic, Danilo, one of Brazil’s most popular hosts, has earned more than US$15,000 a month. He says he’s overjoyed by the opportunity Uplive gives him "to show myself to the world."

To celebrate this five-year milestone, Uplive is hosting an in-app celebration with large prize pools for users, as well a number of social contests where users can win additional funds. On Instagram, a user can enter by commenting on an Uplive post and a total of 55 fans from different regions will be drawn at random to win in-app prizes.

Asia Innovations Group (AIG) is a leading live social company with 410 million registered users located in over 150 regions worldwide. It has built a comprehensive and diverse portfolio as it seeks to achieve its mission of enriching people’s lives worldwide through innovative and enjoyable live social products, which foster meaningful human connection. In addition to Uplive, which allows video social hosts to broadcast to the world, and Lamour, the top dating app in global emerging markets, AIG owns SupreFans, a fan-centric live social app. It includes operations in 12 offices around the globe that integrate local live social knowledge to foster individual market development and penetration. Focusing on major emerging markets, AIG leverages its track record of innovation, cutting-edge technology, a scalable global infrastructure, and global insights with local expertise to deliver user and shareholder value based on the most exciting growth opportunities in the live social marketplace.