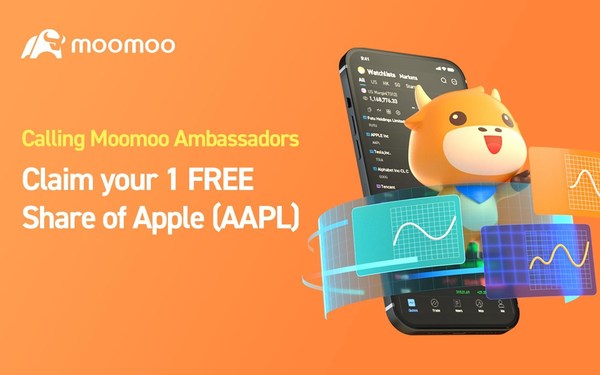 In line with the company’s mission to "make investing easier and not alone," every moomoo user can become a Moomoo Ambassador by referring one or more new moomoo customers. With this new program, both the referrer, aka the Moomoo Ambassador, and their referee will receive free stocks from moomoo, with each share of stock valued between $8–$1,000, based on a lucky-draw mechanism.

U.S. residents with a valid Social Security Number (SSN), who are 18+ years old can become a Moomoo Ambassador by downloading the moomoo app, registering an account with Futu Inc and inviting new users. Once in the app, moomoo users can find the Moomoo Ambassador program by visiting "Free Stocks” under the "Me" tab. When outside of the moomoo app, moomoo users can visit the Moomoo Ambassador page and click on the "Invite Friends" button to get a personalized invitation link, which can be posted to one-on-one messaging apps, such as WhatsApp, iMessage, SMS messaging, Line, or social media sites, such as Twitter, Facebook, reddit, LinkedIn, Snapchat, Youtube or TikTok, etc.

Moomoo is one of the fastest-growing investor communities in the world, with more than 14 million users, according to Futu’s Q1 Financials posted on May 19th, 2021. "Since the inception of Futu in 2012, we have been committed to improving the investing experience of our users, dedicating over 70% of our employees to research and development. We also believe that investing should not be a difficult and lonesome process and have placed great emphasis on social elements to connect traders through the moomoo community and give moomoo users, who are mostly retail investors, access to previously unattainable publicly listed companies in the moomoo app," says Leaf Li, Founder & CEO of Futu.

Recognizing the importance of having both user-friendly design and advanced product features, Futu Holdings Limited designed moomoo with a sleek user interface, zero-commission trading of equities in several stock exchanges across the globe, including US, Hong Kong, Singapore, and China A Shares. The moomoo app also includes the latest technologies, such as AI-driven stock screeners and advanced stock trading charts, facilitating the convenience of trading across multiple markets with its multi-currency capability. Futu Holdings Limited reported a 368% year-over-year revenue growth, based on its Q1 2021 financial reports.

"We believe that our Moomoo Ambassador program will not only reward users for sharing but also demonstrate that we put our money where our mouth is to ‘make investing easier and not alone.’ If you love moomoo, tell your friends about it. If you have suggestions for how moomoo can improve, let us know. I check comments in the moomoo community all the time." continued Li.

A brokerage firm registered with the SEC (CRD#: 283078/SEC: 8-69739); a member in good standing of Financial Industry Regulatory Authority (FINRA) and the SIPC; Futu Inc. is regulated by the SEC and FINRA. It is an indirect, wholly-owned subsidiary of Futu Holdings Ltd.

Futu Holdings Limited (NASDAQ: FUTU) is an advanced technology company transforming the investing experience by offering a fully digitized brokerage and wealth management platform. Pursuing a massive opportunity to facilitate a once-in-a-generation shift in the wealth management industry and build a digital gateway into broader financial services. The organization’s primary fee-generating services include trade execution and margin financing which allow its clients to trade securities, such as stocks, warrants, options, futures, and exchange-traded funds, or ETFs, across different markets. Futu enhances the user and client experience with market data and news, research, as well as powerful analytical tools, providing them with a data-rich foundation to simplify the investing decision-making process. Futu has also embedded social media tools to create a network centered around its users and provide connectivity to users, investors, companies, analysts, media and key opinion leaders.