SEOUL, South Korea, June 22, 2021 /PRNewswire/ — Pearl Abyss unveiled a new class "Corsair" and content roadmap for the second half of the year at the Black Desert PC X Mobile X Console Heidel Ball 2021, a global user event held on June 19. The event was live-streamed across the globe and watched by more than half a million fans, the highest total viewership to date. 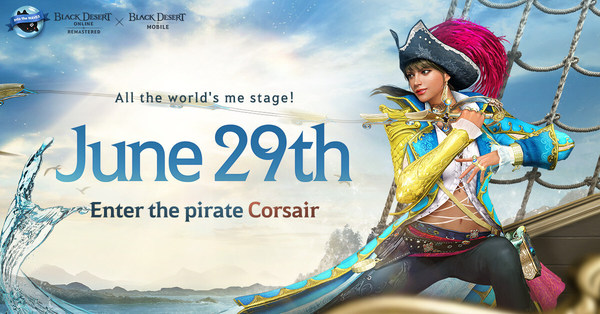 The new class "Corsair" is a free-spirited and delightful female character that will arrive in Black Desert simultaneously on all platforms on June 29. A pirate related to the Crow Merchants Guild, who are known as rare item sellers, Corsair will lead the story of an adventure involving a stolen treasure map.

Corsair’s free combat style takes inspiration from the waves of the sea – unpredictable and powerful. She uses a Serenaca, an elongated main weapon that allows her to move and attack freely in the air, and a rope that allows her to swing around enemies. Adventurers can start pre-creating Corsair as well as the new Summer Season character this week and earn special rewards.

In addition to the new class, a number of big content updates are also coming to Black Desert for PC and console. The first biome of the new co-op dungeon Atoraxxion, Vahmalkea, will be introduced on July 21, followed by three other biomes coming later this year. An extreme monster zone Terror of the Deep Sea and a new mini-game Yarr, a game based on the rules of poker and the dice game ‘Yacht’, will be updated in August.

Black Desert Mobile will also offer various content updates in the second half of this year. In addition to Corsair, 4 new classes – Lahn, Mystic, Solaris, and a mystery class – will be introduced. Chaos Muraka, the second multi-channel boss that drops great rewards will also arrive. The long-awaited expansion, Great Ocean, will be available and allow Adventurers to build ships and enjoy exclusive features such as Sea Fishing and Treasure Recovery.

In addition, other exciting content updates for all platforms were also revealed in detail during the Heidel Ball 2021 event. More information about the content updates for the second half of 2021 can be found on the official websites of Black Desert on PC, mobile, and console.