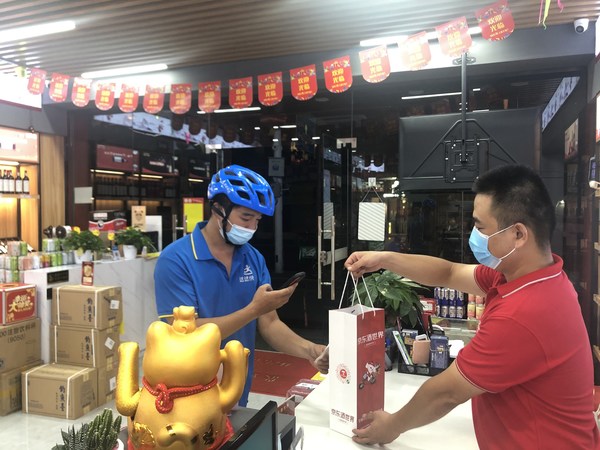 At midnight on June 18th, a Dada Now rider picked up drink orders from a JD Liquor World store in Xiamen

On June 18, 2021, a consumer in Xiamen placed an order on the JDDJ platform for a bottle of sweet white wine from a JD Liquor World at midnight, and it only took 3 minutes and 10 seconds to be delivered. Based on the deepening omni-channel strategic cooperation between Dada Group and JD.com, more than 60,000 retail stores launched on JD.com through JDDJ on June 18. During the Grand Promotion, sales of these offline stores on JD.com were 4.6 times that of the Double 11 Shopping Festival last year.

Among supermarkets on JDDJ, Walmart remained the sales leader at chain supermarkets for the fifth consecutive year. Sales of Yonghui Supermarket in the lower-tier cities were 2.1 times greater than the same period last year. CR Vanguard’s sales increased 2.2 times, and sales from their boutique supermarkets increased 4 times compared to the same period last year. Leading chain retailers and brand owners such as Jiajiayue and BBG Supermarket, Lenovo Lecoo, Watsons, Gialen, Apple, Huawei and Xiaomi each delivered doubled growth or greater, in sales on JDDJ’s platform. On the peak day of the 6.18 festival, sales of the iPhone 12 were five times that of the Double 11 Festival last year.

In terms of the intra-city delivery, Dada Now’s Dedicated Delivery service is designed specifically for chain merchants, providing customized solutions to help them reliably guarantee online order fulfillment during the shopping festivals. During the 6.18 festival, the service fulfilled all of Sam’s Club omni-channel orders, allowing Sam’s Club members to enjoy a premium and convenient shopping experience. Delivery orders from Sam’s Club were 2.8 times more than the same period last year.

For orders that require faster delivery times, Dada Now riders delivered products to consumers within 30 minutes on average, during this year’s Festival. High-value orders such as digital devices, home appliances and certificate documents, were automatically matched with Credit Riders for delivery, ensuring the a seamless and safe delivery experience. During the 6.18 promotion, the number of active Credit Riders on Dada Now increased by nearly 50% year-on-year.

At the same time, Dada’s Smart Distribution SaaS (Software as a Service) system, which is based on Dada Now’s self-developed smart logistics system and big data platform, offers merchants rider management, smart delivery, and crowdsourcing business for different delivery scenarios. The system digitally empowers merchants by reducing costs and increasing efficiency. Dada Smart Distribution SaaS system helped chain merchants and distribution service providers such as JD Liquor World, to increase the efficiency of its own rider team by about 20% and shorten the average order delivery time by about 8 minutes during the 6.18 Festival.