YINGKOU, China, Dec. 8, 2020 /PRNewswire/ — The 2020 Liaoning Province Labors’ skills final competition and the province’s live e-commerce industry skills contest were held in the online celebrity town of Yingkou, Laobian District from December 7th to 8th. 94 contestants with 15 teams from 14 prefectures and cities in Liaoning Province and Shenfu Demonstration Zone competed fiercely after auditions and preliminary competitions, according to the People’s Government of Laobian District. 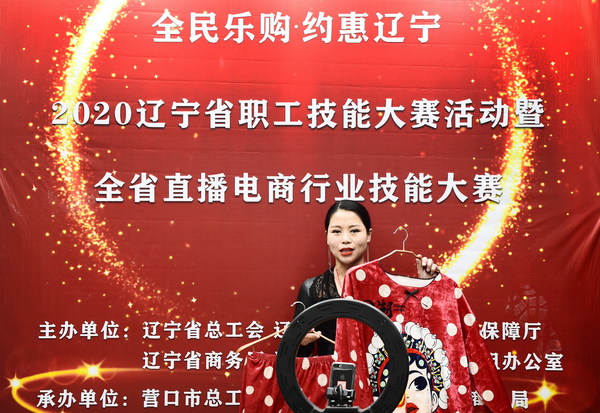 Liaoning anchors compete in the small town of online celebrities in Laobian District.

This competition has two contents: "webcast performance" and "webcast marketing". Experts use anonymous accounts to enter the broadcast room from time to time to check the live broadcast and score according to the rules of the competition.

The province’s live broadcast e-commerce industry skills competition is one of the 2020 Liaoning Provincial Workers Skills Competition activities. Led by the Liaoning Provincial Federation of Trade Unions, relying on local labor unions, industrial unions, and industry associations to jointly carry out the "2020 Liaoning Province Labors Skills Competition", it held 21 series of events throughout the year, involving 47 types of work, covering more than 10 different industries, and 1,338 competitions by trade unions and enterprises at all levels have been held this year.

The Laobian District, an unknown small town on the outskirts of Yingkou, conforms to the trend and continues to create miracles, starting from scratch to a strong rise as a "network celebrity highland" and a full-factor professional network celebrity economic city covered by 5G, it has been selected as a national digital village pilot, approved as the first batch of e-commerce live broadcast demonstration base in Liaoning Province, and has become the first economic demonstration base of online celebrities in Liaoning Province. It has attracted more than 300 high-quality enterprises to settle in at present. It has 150,000 online anchors and a huge fan base of 350 million.

With the development and growth of Laobian online celebrity town, more and more online celebrity-related enterprises are also rapidly gathering in Laobian, providing a broad range of jobs and opportunities for employment, entrepreneurship and sideline for more groups. At present, through "all the people as anchors, everyone can sell goods", Laobian District has stepped into the era of "national live broadcast". There are live broadcast buildings in the streets, live broadcast stations in the countryside, live broadcast points in the courtyard, and live broadcast rooms on the side of the road. People are getting richer.