BEIJING, July 31, 2020 /PRNewswire/ — iQIYI Inc. (NASDAQ: IQ) ("iQIYI" or the "Company"), an innovative market-leading online entertainment service in China, today announced that its original interactive virtual reality (VR) film Killing a Superstar (the "Film") has been shortlisted for an award in the Venice VR Expanded category at the prestigious Venice International Film Festival, the second time that the Company’s original VR content has been recognized in a major international film festival. 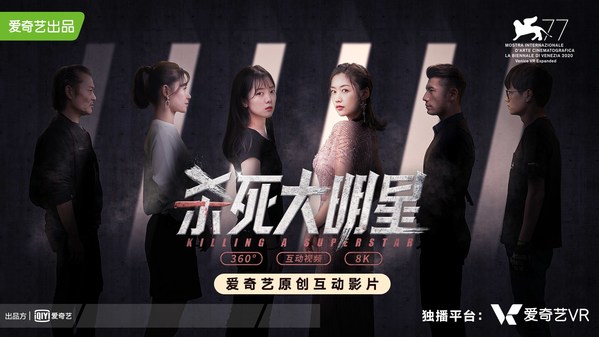 Killing a Superstar is a suspense film that tells the interwoven stories of various characters confined in a luxury villa where a sudden homicide took place. iQIYI’s VR team used 360°+8K HD VR technology to create the best-in-class original VR interactive content based on an original script. The film is the first to adopt multiple parallel narratives in immersive drama, using panoramic observation and multi-viewpoint switching. By giving the audience the freedom to switch between scenes at any time, Killing a Superstar invites users to explore the film’s storyline and narrative logic. Users can also identify clues and complete tasks while watching to create a unique and engaging experience. The VR film supports 8K HD format and Dolby Atmos, delivering an unprecedented premium immersive VR interactive audio-visual experience.

Killing a Superstar‘s recognition by the Venice International Film Festival is the latest example of how iQIYI’s original VR content is garnering international attention and acclaim. The nomination means that Killing a Superstar has not only been highly recognized by the industry worldwide, but also demonstrates once again that iQIYI remains at the forefront of the VR revolution.

"As a major immersive 8K HD VR project for iQIYI this year and the first film for its VR Interactive Theater, Killing a Superstar defies traditional movie-watching conventions as the understanding of its narrative logic is dictated by the audience rather than the director, giving viewers greater freedom for engagement," Zhang Hang, Vice President of iQIYI said. "The inclusion of Killing a Superstar in the Venice International Film Festival shows that iQIYI’s tech-driven innovative VR content has achieved another industry breakthrough globally. As an innovative expression form for the VR industry, the interactive VR content will help boost the growth potential of the VR industry by tapping into the value and popularity of IP productions."

As one of the first domestic technology and entertainment companies to tap into the VR market, iQIYI has steadily established a VR lineup covering dramas, films, variety shows and gaming. To date, iQIYI has launched a number of VR titles, ranging from dramas (Ghost Blows Out the Light: Mu Ye Gui Shi, Infernal Affairs VR series, City Strange Talk) and films (the Last One Standing VR, Attention VR), to interactive content derived from dramas and variety shows such as Idol Producer, the Rap of China and iPartment Season 5, cartoons (TUKTAKMAN VR) and games (Chinese Paladin 4 VR, The Knight of Shadows Between Yin and Yang VR). Many of these have won critical acclaim and recognition. For example, in 2018, The Last One Standing VR was also shortlisted for an award at the 75th Venice International Film Festival, becoming the first Chinese science fiction VR film to receive the honor.

Killing a Superstar is released on July 31 to iQIYI users in China’s mainland on the iQIYI VR APP or the Qiyu all-in-one VR headset platform. The Film will premiere online at the Venice International Film Festival from September 2 – 12.