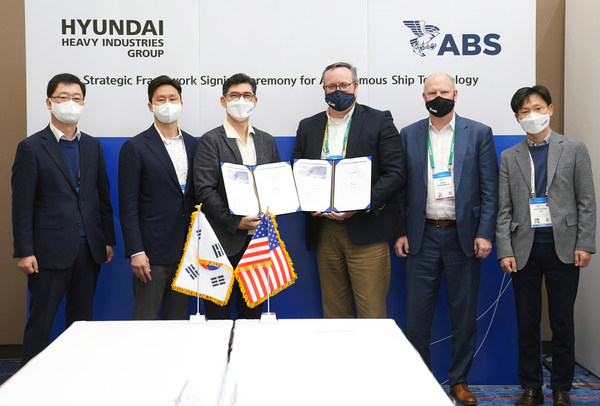 Avikus announced on January 9, 2022, in Las Vegas, where the world’s biggest tech show CES 2022 is taking place that it signed a memorandum of understanding (MOU) with ABS to obtain the Approval in Principle (AIP) for the implementation of autonomous ship technologies.

As a member of the International Association of Classification Societies (IACS), ABS is a maritime classification society that identifies technological suitability and selects the relevant criteria for cutting-edge maritime technology and offshore structures while promoting stable maritime industry development.

Through the tests, Avikus will be capable of obtaining each certificates by stage for its autonomous vessel technologies, while ABS will review the design, regulate testing procedures and verify the implementation for each stage based on the actual operation data of Avikus. From trials of the autonomous technologies in real-life conditions, the joint efforts from the two companies will be an important step in making maritime autonomous operations a practical reality. Lessons learnt from this collaboration will also contribute to the development and improvement of standards and regulations for autonomous technology and operations.

After the successful demonstration of the full autonomous cruising as the first in Korea in June 2021, Avikus plans to jointly demonstrate the autonomous shipping technology with ABS for a transoceanic voyage of a large-scale commercial vessel which is currently under development.

According to Acute Market Reports, a global market research firm, the autonomous vessel and related material and equipment markets are expected to grow by 12.6% annually and reach USD 235.7 billion in its market size by 2028.

"The agreement with ABS holds a great significance as it promotes the technology standardization through the stage-by-stage certification of Avikus’ proprietary technologies. With these commitments, we will contribute to expanding the autonomous vessel market and proactively preoccupy the related markets," Avikus CEO Lim said.

"Autonomous vessels will have a significant role to play in the future of maritime transportation but they will need to be at least as safe as existing vessels. It will take extensive research and development activity, teamwork and sharing of expertise among the leading maritime players to get us there. That’s why this agreement is a game changer, as it unites ABS’ insight with HHI’s expertise to develop practical applications of the technology,"said John McDonald, ABS Executive Vice President and Chief Operating Officer.