HeroesTD, a blockchain-based game, is a perfect combination of NFT gaming and DeFi that enables players to play and monetize their virtual experiences. With the rise of Metaverse – a new period in the future, as well as the era of decentralized gaming, HeroesTD is expected to be the new phenomenon of Vietnam NFT games.

SINGAPORE, Nov. 11, 2021 /PRNewswire/ — HeroesTD, the NFT game which is built with blockchain technology, is expected to become a potential goldmine in Vietnam. More than entertainment, many individuals and investors earn money from NFT games nowadays. With the HeroesTD games, players can have fun and earn profit by trading items on the NFT marketplace.

HeroesTD is developed by the CG Studio team, consisting of outstanding and experienced members in the mobile game industry and blockchain technology.

Founded in 2013 as VGames, CG Studio team has developed many games for cross platforms. Since 2015, the team has created and published some famous online strategy games such as GunGun Online, Chess TD, and others. These mid-core strategy games reached more than 6 million downloads on mobile app stores and the number continues to increase everyday. 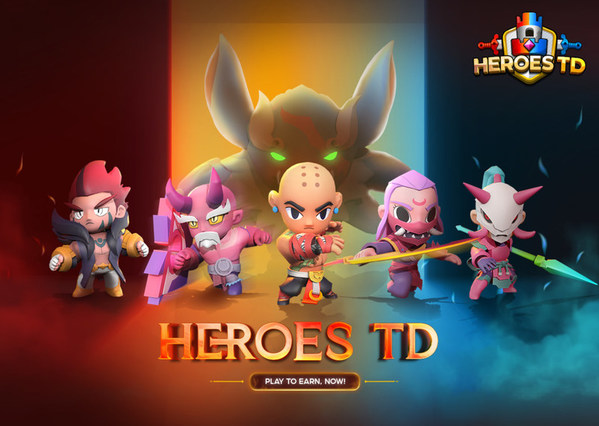 The CG Studio team has built up a whole mysterious, mesmerizing universe called Aeon Disk, with a story behind it. The Aeon Disk, at that time, had been separated into two lands – Cloud Spire and Eden, which changed into a land called The Shattered World after years of infighting and destruction.

HeroesTD is a collectible tower defense strategy game built and developed on the blockchain platform. In this game, players can summon, collect, build their own Heroes deck and engage in matches with other players.

There are 2 types of Heroes in this game, including Basic Heroes and NFT Heroes. Basic Heroes are given to new players and are used in basic level PvP Arena matches, allowing players to complete quests, events and earn CGC. NFT Heroes are needed for players in high-level Arena, Ranked Match, Tournaments, or Challenges mode, which requires stronger decks. Players can obtain NFT Heroes by purchasing them from the Marketplace or summoning them with 2 NFT Heroes.

The CG Studio team has successfully written down a magnetizing tale about the endless war of power between The High Class and The Low Class. Playing HeroesTD, players could not only enjoy the thrilling gameplay but also explore the hidden plot.

Along with their effort, the CG Studio team has gained trust and expectations from many investors. They receive support in both technology and investment from top investors and experts in the gaming industry and blockchain platform.

HeroesTD offers a new approach to the Play-to-earn gaming industry. With interesting game mechanics, the game creates a new wave in the Vietnam gaming market. As a combination of experience, knowledge, creation, and dream, HeroesTD promises to become one of the leading NFT games, not only in Vietnam but also around the world.