SHENZHEN, China, Nov. 25, 2021 /PRNewswire/ — HAI ROBOTICS, a global leader in Autonomous Case-handling Robotic (ACR) system for warehouse logistics, announced that its first project in the U.K. with Chinese cross-border warehouse operator WINIT a success as deliveries for holiday shopping parcels are about to knock on the door. 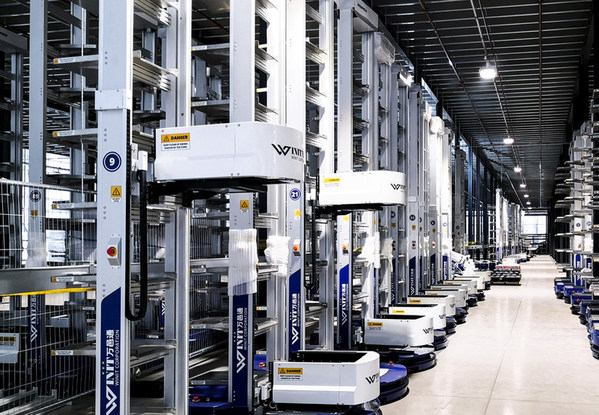 The project provides 120,000 storage locations with shelving height of 4.3 meters in a 10,000-sqm warehouse in Tamworth, Staffordshire. By deploying 100 HAIPICK A42 robots and 16 On-conveyor Picking Workstations in the warehouse, goods-handling efficiency is improved three to four folds than manual work with a daily handling volume of up to 50,000 pieces.

The warehouse owner WINIT is a Shanghai-based provider of overall solutions for cross-border e-commerce and runs overseas warehousing and distribution services in Australia, the U.S. and in several European countries. With the project going live, it saw its warehouse throughput spiked, comfortably accommodating the inrushing order-fulfillment requests for cross-border warehousing and logistics from merchants around the world, driven by the online shopping boom since the Covid-19 lockdown.

Demands for global warehousing service has dramatically surged with the flourishing cross-border e-commerce businesses in recent. Custom statistics indicate that in 2020, Chinese cross-border trade volume amounted to RMB1.69 trillion, rising 31.1% from the previous year and the figure is estimated to go up to RMB16 trillion in 2021. By 2020, the number of overseas warehouses owned by Chinese operators exceeded 1,800, totaling more than 12 million square meters in land area.

However, cross-border warehouse operators are often confronted with some hard nuts to crack.

To start with, a major issue that has been constantly vexing warehouse owner who operates overseas is staffing shortage and rising hiring cost for local laborers. They also found it a headache to maintain a stable workforce in their warehouses, which are often located near commercial hubs in industrialized countries, even with above-average level wages. Automating their warehouses has become a pressing issue.

The second challenge is the huge number of SKUs owned by different merchants, which could range from consumer electronics to baby toys. The fact has raised concerns of storage density and picking efficiency. To meet consumers’ growing demands for short parcels delivery time, furnishing a warehouse with robots that can handle complex order-fulfillment tasks can be a rewarding decision.

Last but not the least, a flexible warehousing solution that can be swiftly deployed weighs heavily for cross-border warehouse owners whose growing businesses can’t wait for too long.

WINIT, who found no shortcuts to address those concerns, found the HAI ROBOTICS’ solution a good match for the needs of high storage density, goods-handling accuracy, operation efficiency and flexibility.

With the HAIPICK A42 robot that allows picking and sorting with eight loads in one movement, one worker can handle 450 pieces of goods per hour, which is three to four times faster than manual work. The solution has also improved storage density by 130% with spaces from 0.25m-to-6.5m-high being fully utilized. The HAIPICK system, which supports intelligent totes identification and labels reading, boasts 99.99% picking and sorting accuracy.

Kane Luo, Vice President of Sales from HAI ROBOTICS, said that customized plan was made for the project to improve performance, including elevated storage density and innovative workflows to facilitate necessary manual work. "We were primarily obliged to provide ACR system. However, we’ve taken into consideration the whole process from inbounds to packaging of outbound goods. The workstations were also ergonomically redesigned according to overseas standards," he said.

HAI ROBOTICS, a trailblazer of Autonomous Case-handling Robotics (ACR) system, is committed to providing efficient, intelligent, flexible, and customized warehouse automation solutions through robotics technology and AI algorithms. It aims to create value for each factory and logistics warehouse.

The HAIPICK ACR system, independently developed in 2015, is the world’s first of its kind.

Founded in 2016 with headquarters in Shenzhen, China, HAI ROBOTICS has set up five subsidiaries in Hong Kong SAR, Japan, Singapore, the U.S. and the Netherlands, serving customers from more than 30 countries and regions. It now has over 1,200 staff, more than 50% of whom are engineers. The company has acquired more than 600 global patents for core intellectual properties involving positioning, robot control and warehouse management. In the latest C and D rounds of funding in 2021, the company raised over US$200 million in total.