Google came up to the Mountains of Baguio City for the Google Map Maker Summit Luzon.

I was so excited to attend this seminar because it would be my first time to attend a Google-led event, for a person living in Baguio City it is seldom that tech companies come up to Baguio City for purposes of sharing knowledge about their products and services. 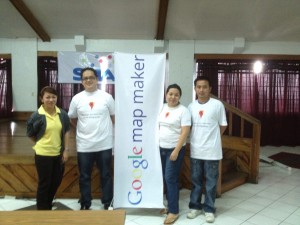 Why Do Map Making?

Of course i joint the summit not because i am drooling on attending a Google-led event (partly maybe), but most of all i would like to learn more about map making. See, i have been incorporating google maps in my blogs especially in my travel blogs. I found the use for Google maps and map maker when my family traveled to Ilocos for a 5 day Vigan and Laoag trip. Our driver doesn’t know what road to take and we do not have a map which we could use. Luckily, i remembered that my phone can access Google maps and to cut the story short we did not spend our vacation being lost, we were able to get to our destinations safe and sound. 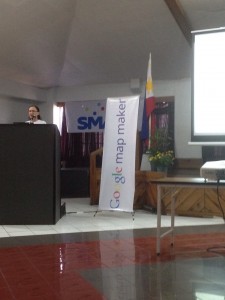 I have utilized map maker since 2011 after our Ilocos trip, the trip gave me an idea that maps are very important in travel and since the Philippines is being marketed as a tourism destination it is important to give travelers an avenue to help them move around their chosen destination and not spend their time getting lost. I have decided to place Google maps on my blog for every tourist destination in Baguio City, an objective that stemmed from an objective of looking after the needs of my blog readers. However, there were some factual areas in Baguio City which i mapped that were denied by moderators, since Google map maker utilizes crowd sourcing, my last mapping was denied May 26, 2011.

So you may now get the idea why i was so ecstatic to see the invitation for Google Map Maker Summit in Baguio City. I came early during the event, i was actually the second person there ( i shouldn’t have made that convenience store stop, good thing there was no early bird award).

Registration was a breeze and i was so happy to know that morning, lunch and afternoon snacks were all provided. I have learned so much from the different map makers and bloggers who have organized map up parties in their respective areas. Now, i realized that i need not be alone in mapping Baguio City and the Cordilleras, if possible i could also organize a map up party.

One thing that caught my attention is the fact that Google maps was used in rescue operations or in times of calamities. I was informed about the website nababaha.com and how it helps the Philippines identify areas that are flooded. This made me think about a similar project which will help identify landslide prone areas in the Cordilleras and the Philippines, dubbed as gumuguho.com (patent pending). Another project which Kat and I came up with is a Taxi service where you could use a mobile application for you to call a cab, if you are not aware looking for a cab in Baguio City is difficult especially during rush hours.

In the afternoon of the summit, we were given hands on workshop on how to utilize Google map maker however because of the fact that i have an experience in using Google map maker i spent most of the afternoon session taking photos beside the Google Banner (which by the way is a dream of mine, I am a Google Fanatic). Overall, spending my day at the Google Map Maker Summit was both a learning and social experience as i was also able to meet fellow bloggers as well as Mrs. Aileen Apollo of Google Outreach Southeast Asia. Thank you Google and I hope this will not be the last time for you to come up to the City of Baguio.