ISLAMABAD, Pakistan, Feb. 25, 2021 /PRNewswire/ — Islamabad United, won the game with Karachi Kings by 5 wickets in PSL clash, which gave an overall excellent performance. Now people can watch the latest highlights clips at SnackVideo, a leading short video platform in Pakistan that is fast-growing in popularity.

SnackVideo has recently announced a sponsorship agreement with Multan Sultans and Islamabad United, in a bid to improve its visibility and reach in the country. Together with the two leading cricket teams, SnackVideo is giving fans all over the country opportunities to win coveted items from the sport franchises such as tickets, cricket bats, team apparel and more. This partnership is supported by the Pakistan Super League (PSL), the premier cricket competition in Pakistan.

Fans can win these prizes by joining a competition called the Cricket Lucky Wheel, where fans can cheer for their favorite team by posting short videos on the SnackVideo app and hashtag it with #CricketPawri. Over 30 lucky winners will win team products ranging from tickets to sports jerseys and equipment, while over 30,000 people will win cash prizes. 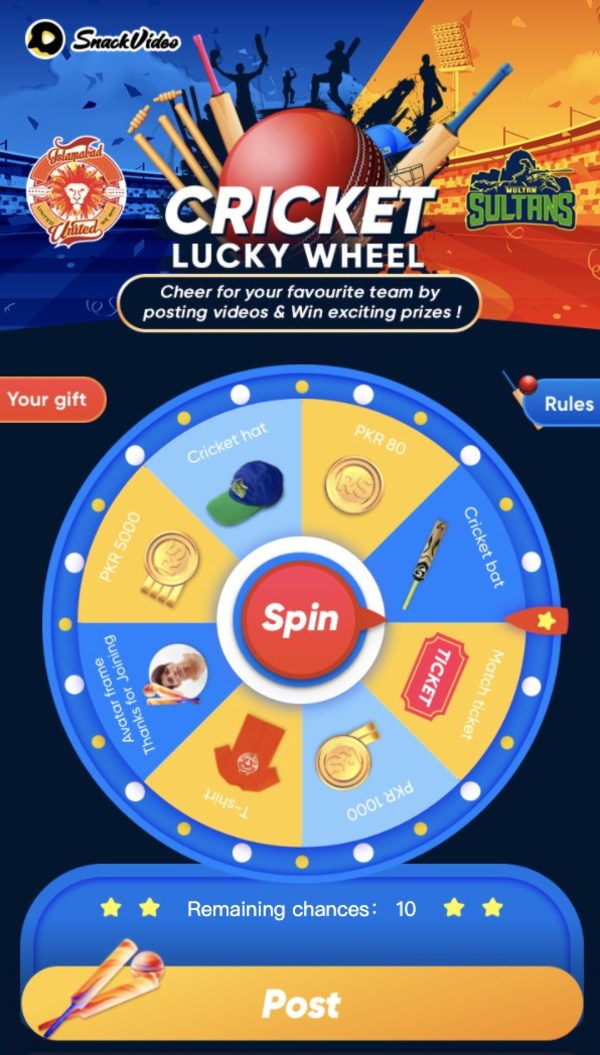 As the official video partner for both teams, fans can encourage their players and team via short videos and share how important cricket is in their lives via the hashtag. ‘Islamabad United is proud to align ourselves with a rising platform such as SnackVideo,’ says Shadab Khan, Captain of the team. ‘SnackVideo aims to give a voice to every person so that they can express themselves, which is what our team have done for our fans in the league.’  Fans of both teams are not going to leave empty-handed as well. As part of the sponsorship agreement, fans will enjoy the chance to win signed team merchandise via SnackVideo.