Lu Yuan, a Chinese teenager, invented an AI Wearable called the "forget-me-not" for his grandmother, who is in the early stage of Alzheimer’s disease. The AI Wearable can help patients recognize their family members and guide them home through a built-in voice assistant. 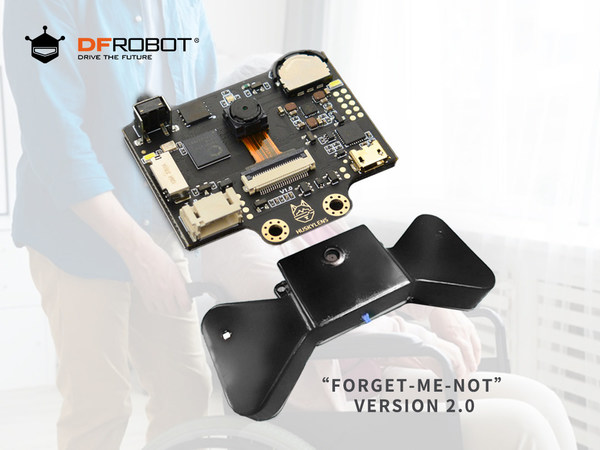 According to Lu’s introduction, the AI Wearable uses Arduino Nano and is equipped with a built-in HuskyLens AI Vision Sensor developed by DFRobot, an ultraviolet sensor, MP3 module, and uses Mind+ for programming. The overall appearance is modeled by 123D Design and the shell is made using SLA (Stereolithography) technology and conducted the process of grinding, polishing and painting.

The built-in HuskyLens in the AI Wearable is an easy-to-use AI vision sensor. It adopts the built-in machine learning technology which can identify human faces. By a simple click, HuskyLens can finish the AI training and start to learn and recognize the new face. Engineered with a built-in UART or I2C interface, HuskyLens can seamlessly dock with Arduino Nano. If the AI Wearable recognizes it is a recorded face, it will control the MP3 module, and tell the Alzheimer’s patients through the earpiece whom they are talking to, along with other bits of information.

The built-in ultraviolet sensor can sense the intensity of ultraviolet rays to tell Alzheimer’s patients whether they are indoors or outdoors. If the AD patients are outdoors for 20 minutes or longer, the AI Wearable will remind them to go back home and play home addresses at the same time.

Of course, being able to make such an invention at such an age is inseparable from his specialized learning since he was a child. According to Lu’s introduction, he got in touch with programming when he was a fourth grader. Lu’s heart-warming invention has become a hit on Chinese social media and hopes this invention helps more Alzheimer’s patients in the future.

DFRobot is a world-leading robotics and open source hardware provider with a large community catering to future creators. The company was founded in 2008 and is currently headquartered in Shanghai, China. Focusing on the promotion of maker/STEAM/AI education and the development of innovative talents of next generation, DFRobot provides high-quality, various intelligent education hardware resources and services in the past few years. So far, DFRobot has entered up to 8,000 schools from over 200 countries and regions globally, with its products and services well-received by more than 20,000 teachers and millions of students worldwide.