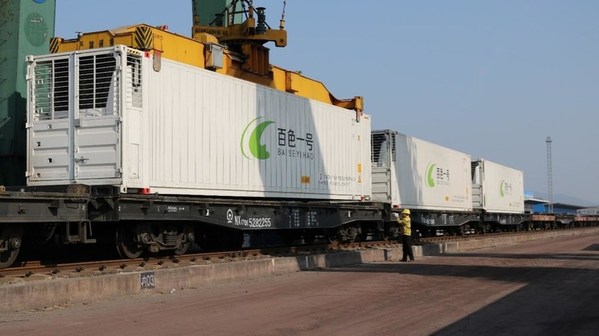 Baise City is a famous base for "transporting vegetables from the south to the north", where more than 3 million mu of ecological vegetables are planted every year. Since its official opening on December 11, 2013, "Baise Yihao" cold chain special train, as the national project benefiting the people by "transporting vegetables from the south to the north and fruits from the north to the south", has not only continuously transported fruits and vegetables produced in Baise to more than 100 large and medium-sized cities, 23 provinces and autonomous regions such as Beijing, Shanghai and Guangzhou, but also solved the sales problems of many fruits and vegetables with low unsalable prices in Baise, increasing farmers’ income. Moreover, it has brought revolutionary changes in the transportation of agricultural products, and made great contributions to the  poverty alleviation and rural revitalization.

Meanwhile, with the unique geographical advantages of "Baise Yihao", a multimodal transport system for cross-border transportation of Baise Yihao sea rail and public rail has been established through ports including Longbang, Pingxiang and Fangchenggang, making Baise Yihao fruit and vegetable special domestic train and Baise Yihao Sino-Vietnamese cross-border direct transport train organically connect with the node cities of China-Europe Railway Express such as Chongqing, Chengdu, Wuhan, Zhengzhou and Beijing, as well as the node cities of southbound passages in Sichuan, Guizhou and Guangxi, expanding the influence of "Baise Yihao" to the whole country and even the world. "Baise Yihao" project has been listed by the Ministry of Transport as the first national demonstration project of cold chain logistics channel construction across Eurasia. In addition, Baise Yihao cold chain logistics system has been successfully integrated into the Belt and Road Initiative.