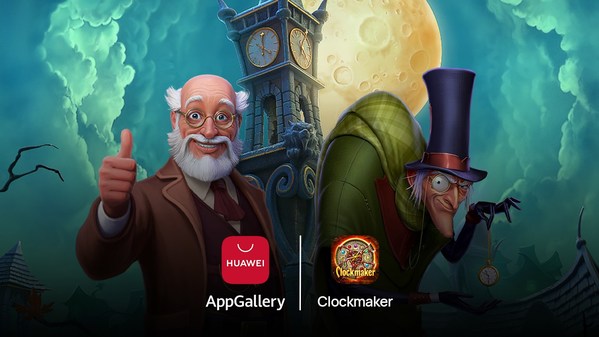 In a race to find the Mystery of the Maleficent Clockmaker and break curses, gamers must swipe their way through the gem-based puzzles to make repairs to an old, enchanted town. As well as navigating through a mysterious atmosphere, Clockmaker invites gamers to face over a thousand mini games which require tactical thinking and skill to blast the gems away.

As part of the partnership, and in celebration of Clockmaker‘s launch, AppGallery and Belka Games are bringing exclusive gifts to players. Gamers who played through AppGallery will receive an exclusive gift pack, which includes 24 hours of unlimited lives, as well as 15 premium rubies to spend within the in-game store. The gift pack is redeemable after completing the first house level at the beginning of the game.

"We are delighted that more gamers around the world can now experience the popular Clockmaker gameplay experience,"said Yuriy Krasilnikov, VP of Business Development at Belka Games. "As we’ve already seen, the game is a huge hit, so we’re thrilled that more gamers will have access as a result of our partnership with Huawei."

Being one of the fastest-growing app marketplaces, and third largest worldwide, AppGallery shows how developers can leverage Huawei’s strong operational support in the lead up to app launch. Clockmaker is a strong example of Huawei’s HMS Core potential, integrating with the IAP Kit and Ads Kit to bring seamless payment solutions and pleasant ad experiences to users.

"Working with Huawei has been an enjoyable experience for the team at Belka Games," said Mr. Krasilnikov. "We have received a great level of operational and development support from the start and we were pleased with the smooth integration of Huawei’s HMS Core Kits so that we can offer fans of the game the services that they deserve."

Clockmaker has achieved huge success in the last two years, across various platforms globally, as well as reached top grossing charts due to its interactive and exciting gameplay. Belka Games’ partnership with AppGallery demonstrates an appetite for growth and implies that fans could expect to see much more in the coming months.

About AppGallery – One of the Top 3 App Marketplaces Globally

AppGallery is available in more than 170 countries and regions with over 550 million monthly active users globally. Huawei has partnered with 4.5 million developers across the globe, with total downloads reaching 384.4 billion in 2020. By the end of June 2021, more than 141,000 applications are integrated with HMS Core worldwide.