LOS ANGELES, March 18, 2022 /PRNewswire/ — Netmarble Corp., a leading developer and publisher of mobile games, is excited to announce the launch of A3: Still Alive‘s INETRIUM Refinery, which allows players to convert the Inetrion Ore to INETRIUM, and also lets them to store INETRIUM in their MARBLEX Wallet. 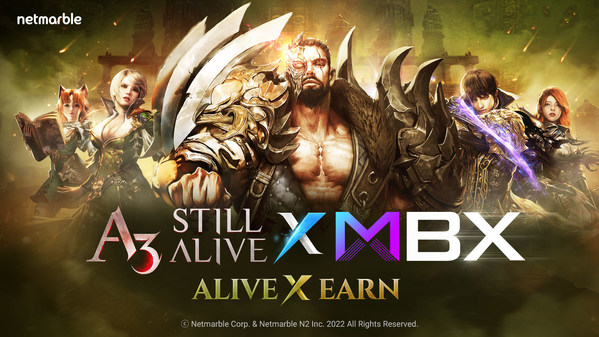 While the further updates to be applied progressively, the players can enjoy the INETRIUM by exchanging in-game goods as well as freely utilizing it outside the game. It can be also converted into Netmarble’s proprietary currency, MBX in the near future.

To celebrate the latest updates, Netmarble’s collaboration event with KLAYTN is bolstering players’ anticipation. 33 players will be selected to receive 777 of KLAY via the Inetrion Ore Shop’s in-game events. Various in-game rewards are also available to players who reach level 190 and 200 in newly opened servers. Further, especially for those who link MARBLEX Wallets to their accounts, will receive a Red Diamond and 1,000 of Blue Diamond, as well as the opportunity to become one of 50 winners to win 5 KLAY. The latest updates and exclusive events can be found via Discord, and check out the overview for this month’s events HERE.

Other details regarding A3: Still Alive‘s new update include:

Set in an apocalyptic fantasy world of swords and sorcery, A3: Still Alive is a cross-genre mobile experience that pairs the enormous and living worlds of Open-World RPGs with the extreme combat of Battle Royale. Players must be vigilant in an always-open Player vs.

Player (PvP) environment as they fight against enemies with intense hack & slash combat and prove their mettle in a variety of PvP and Player vs. Environment (PvE) modes. A3: Still Alive is beautifully rendered with splendid console-quality 3D graphics that are brought to life thanks to the outstanding optimization of the Unity Engine.