CAMBRIDGE, Mass., Jan. 26, 2021 /PRNewswire/ — The Green Future Index, a new study by MIT Technology Review Insights in association with Citrix, Morgan Stanley, and Salesforce ranks 76 countries and territories on the progress and commitment they are making toward a green future by reducing carbon emissions, developing clean energy, and innovating in green sectors, as well as the degree to which governments are implementing effective climate policies. 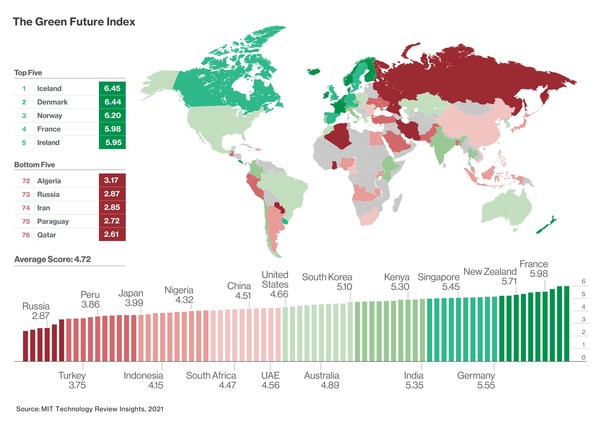 The interactive index shows which countries are progressing fastest in global efforts to decarbonize and limit global heating in line with the goals of the Paris Agreement.

The key findings are as follows:

"With hundreds of billions of dollars being injected into economies worldwide, covid-19 has created huge momentum for developing green industries and financing infrastructure that will be clean, technologically advanced, and climate resilient," says Nico Crepaldi, head of custom content, MIT Technology Review. "In the future, we’re likely to see ‘green’ being synonymous with economic competitiveness."

For more information, please contact us at [email protected]
About MIT Technology Review