HILLIARD, Ohio, March 12, 2021 /PRNewswire/ — It is fair to say that Qualcomm® Quick Charge™ 5 technology has made an obvious impact on the fast charging industry since it released last year. Baseus is incorporating this technology into its new charging accessory, which has more than 100W of charging power. This allows users to charge a 4500mAh phone battery from 0 to 50% in just five minutes. Moreover, the 100W+ power enables Quick Charge 5 to have better performance in other areas. For example, 100W power is powerful enough for fast charging ultraportable laptops. The Quick Charge 5 implementation in a mobile device will also bring a better experience in terms of battery life and other aspects.

Many domestic manufacturers have already devoted to the development of Quick Charge 5 chargers, but the first exposed one may be Baseus 100W charger. Judging from the size and thickness, it should use gallium nitride technology. If it is true, then it is likely to be the first domestic GaN charger supporting the Quick Charge 5 technology. In view of the strategic partnership between Baseus and Navitas Semiconductor which represents the first echelon of domestic GaN R&D strength, it might well be true.

The picture below is an image just officially revealed by Baseus. The small fast charging device surrounded by several laptops should be Baseus latest product using the Quick Charge 5 technology. The slogan "All laptops" is truly exciting. Does it mean that users no longer need to carry an as heavy as a brick laptop charger? This new charger shouldn’t be too bulky according to Baseus style. If it is compatible with most laptops, it can solve most customers’ pain point. In short, it is worth waiting for. 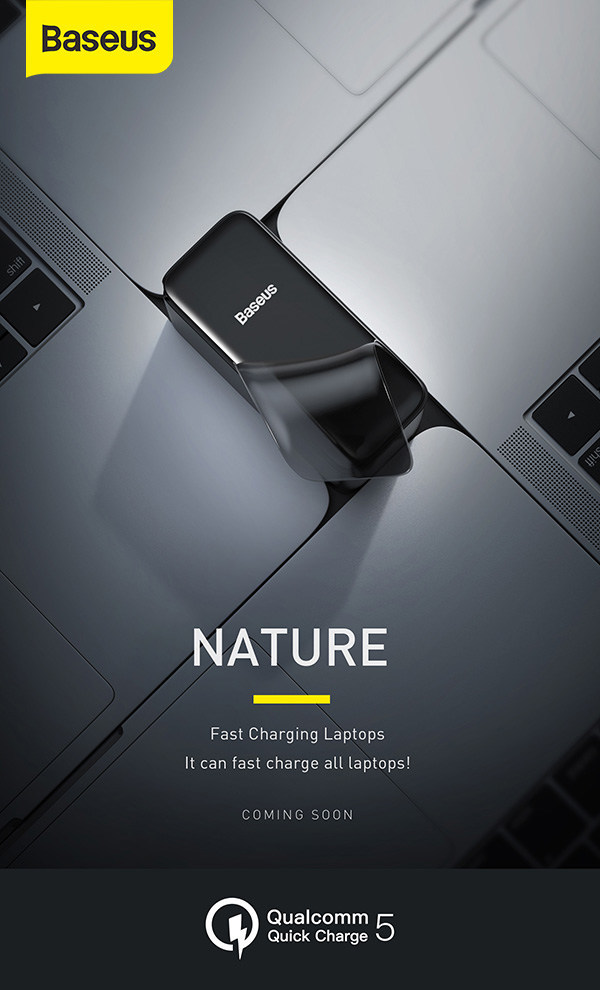 As a new generation of semiconductor technology, gallium nitride chargers have higher power and a smaller size than traditional high-power chargers, making it easier to carry. The biggest change for users is that they can replace the original large charger of a laptop so that they can travel light.

A more pleasant mobile working is predictable. People just need to carry a small Quick Charge 5 gallium nitride charger for computers and phones most of the time. Just taking 15 to 30 minutes, customers’ phones and laptops can have a few hours of battery life. Let us look forward to the birth of such an epoch-making new product together.

Quick Charge is designed to increase the battery charge of a device by up to 50% in 5 minutes. Actual results may vary depending on device design.

Qualcomm and Quick Charge are trademarks or registered trademarks of Qualcomm Incorporated.