CAO LANH, Vietnam, July 5, 2022 /PRNewswire/ — XAG, the trailblazer of agriculture robotics and AI, has officially launched its large-capacity agricultural drone P100 in Vietnam, an innovation that supports the transformation into a more productive and sustainable farming mode.

This multi-function drone can autonomously implement precise spraying, fertilizing, and sowing for multiple crops such as rice and fruit trees. Its use around the farm is expected to boost yields while cutting chemical and water use, which helps reduce the stress and fatigue of smallholders coping with huge spike in fertilizer costs. 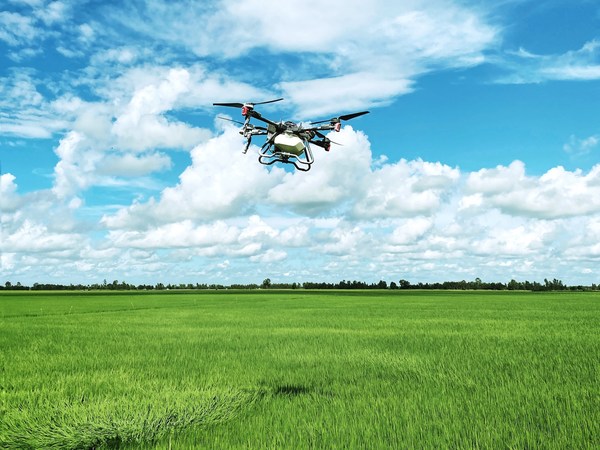 The versatile drone for precision farming

The P100 is the latest model of XAG agricultural drone that is specifically developed to conduct the grueling farm work. From spraying pesticides, spreading fertilizers to broadcasting seeds, the process is turned automated and only targets where it is needed.

XAG P100 is crafted in a modular, detachable structure that can fully separate the flying platform from task systems. As a result, the drone can flexibly switch between the spraying and spreading modules. The handling weight is also reduced to make transportation and maintenance much easier for the operators.

Compared to the previous versions, XAG P100 Agricultural Drone has increased its payload to 40 kg, enabling higher efficiency in serving larger fields. As the drone’s spraying system, XAG RevoSpray 2 can carry 40 liters of liquid and spray up to 10 meters wide to protect crops against present and emerging pests.

It combines new peristaltic pumps and nozzle shutoff valves with mature rotary atomization technology. This allows high-precision spraying of atomized droplets between the sizes of 60 to 400 microns. The flow rate and droplet size can be accurately controlled on APP, so that the drone can evenly deliver chemicals to better cover the crops while lowering the use of pesticides. The shutoff value added inside the nozzles prevents chemical leakage during turning and transport of the drone.

XAG RevoCast 2 is the broadcast system of P100 and reshapes the spread methodology of agricultural drones. It is redesigned with industry-leading vertical centrifugal spreading discs and the smart screw feeder, which can adapt to various types of fertilizers, as well as being more resistant to winds to avoid seed drifting. With the flight speed of up to 13.8 m/s, one battery pack would suffice to spread 280 kg fertilizers.

Instead of rice transplanting, the XAG P100 drone can be used for direct rice seeding to ease the burden on Vietnamese farmers. When mounted a 60-liter granular container, it disperses rice seeds evenly throughout the paddies to achieve the ideal plant density and hence elevate rice yields.

While Vietnamese farmers have been relying on manual workforce to grow food, the XAG P100 can perform farming tasks with full automation. Based on the RTK centimeter-level positioning module, the P100 is equipped with the ability to plan its flight route and self-navigate at high accuracy. Followed by a few parameters set on the cellphone, the drone will function on the predetermined flight path without misses or overlaps.

With this level of user-friendliness, farmers of all ages can easily pick up the operation of the XAG P100 drone after simple training. It implies the potential of disseminating drone technology to benefit small-scale farmers and close digital divide in Vietnam.

Currently, XAG’s local distributors have organized demonstration tours to scale up P100 drone across the Mekong River Delta. More farmers and agricultural talents are introduced to this new technology, making plans for adoption to reduce costs or advance sustainable agriculture.

This May, 150 students from the Can Tho University, who major in agricultural economics, became the first local explorers of XAG P100 drone during a demonstration. On an 8-hectare durian garden, the autonomous drone displayed its efficient spraying and was later commented on its advantage of saving time and labor effort for farmers.

The agricultural sector plays a crucial role in Vietnam’s economic development and greatly contributes to food production as the world’s second largest rice exporter. Approximately 70% of the country’s agricultural products come from more than 22 million smallholders.

With the launch of its P100 Agricultural Drone, XAG looks forward to bringing automation and sustainability to Vietnam’s diverse food basket. Small-scale farmers will have easier access to agile, cost-effective production tools and step into the future of farming.