BANGALORE, India, March 20, 2021 /PRNewswire/ — Graphic India, the leading Indian character entertainment creator for superheroes and comics announced the launch of a new business subsidiary, TOONSUTRA which will become the first webtoon comics platform for mobile devices exclusively for India for free download on both iOS and Android devices. 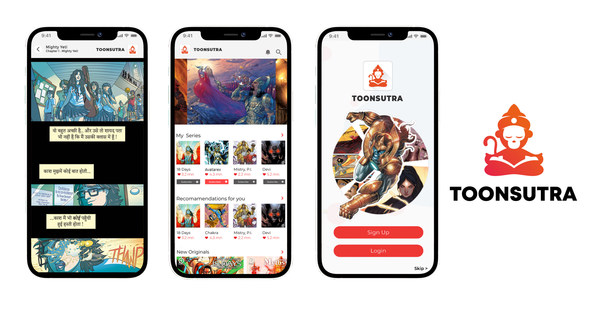 TOONSUTRA will launch in April to bring Indian audiences hundreds of high quality webtoon formatted comics optimized for mobile devices. The new platform will release new free stories every day from groundbreaking creators and storytellers in India as well as top global comics made available in India and in Hindi and other regional languages for the very first time.

The TOONSUTRA app will feature a wide range of content for audiences across superhero, fantasy, romance, sci-fi, Bollywood, mythology, action, and more.

"TOONSUTRA will become India’s new storytelling home for disruptive creators across the country to experiment, innovate and create engaging webtoon comic stories for the world," Graphic India Co-Founder, Sharad Devarajan commented. "Webtoon platforms have become an explosive phenomenon across Asia with top webtoon apps cumulatively reaching over 70 million monthly users and over a 100 billion views a year. For the first time we want to make a webtoon app dedicated for Indians and spark a mobile webcomic revolution."

In addition to comics from around the world, the platform will showcase and promote emerging rising star creators across India and give them a home to tell their stories.

In addition to showcasing breakthrough Indian talents, TOONSUTRA will also offer users exclusive original webcomics based on some of the country’s biggest hit properties in Film and TV such as the mega-blockbuster film, Baahubali and the recent animated hit streaming series, The Legend of Hanuman; as well as new original webtoon comics based on Chakra The Invincible, the Indian superhero created by the legendary, Stan Lee and Graphic India Co-Founder, Sharad Devarajan.

In addition to Indian content, the TOONSUTRA app will feature some of the biggest international superhero comics from leading US publisher, Valiant Entertainment bringing their hit characters Bloodshot, Shadowman, X-O Manowar, Harbinger, Archer & Armstrong, Ninjak, Rai and more to Indian audiences in Hindi for the first time.

People can find out more information and sign up for the launch at Toonsutra.com