OSAKA, Japan, Sept. 28, 2021 /PRNewswire/ — The World’s First Hybrid Wireless Battery will be launched on Indiegogo this week by CIO Co., Ltd., a Japanese smartphone accessory company in Osaka, Japan. This project raised over 160,000 USD on the Japanese crowdfunding site "Makuake". 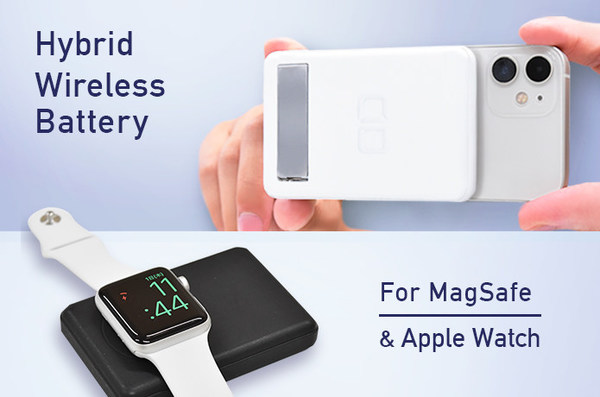 CIO’s newly launched power bank can be attached to iPhone 13 or iPhone 12 with its magnet, also it can charge your Apple watch at the same spot, which is never invented before.

The World’s First Hybrid Wireless Battery is a power bank which has two charging coils built into one pad, which can automatically identify the device placed on it and send the proper current. This feature is one of the most innovative creations that has never been developed before.

With its built-in magnet battery, it can attach to and charge iPhone 13/iPhone 12. In addition, the same surface can also be used to charge the AppleWatch, which can start charging by simply placing it on top of the battery, just like the iPhone.

Furthermore, there is a built-in stand on the back of the battery, so you can watch videos while charging your phone or looking at recipes while cooking.

The USB-C port enables PD 20W fast charging, so you can charge your iPhone at maximum speed.

It is designed to be compact enough to fit in the iPhone 13 mini and not get in the way of the camera. You can upgrade your charging experience with the CIO’s World’s First Hybrid Wireless Battery.

Here are the details again about this exciting project:

About CIO: CIO Co., Ltd. has been striving to achieve greater convenience for people since 2017. Based on the concept of, "delivering the latest and most exciting gadgets",  CIO Co., Ltd. does not just import the products, but is committed to developing new products for customers.

For more information, contact us by email: [email protected]