Moniwar, the game built on the leading NFT and DeFi technologies, is making solid strides toward dominating the worldwide NFT Game Blockchain industry. 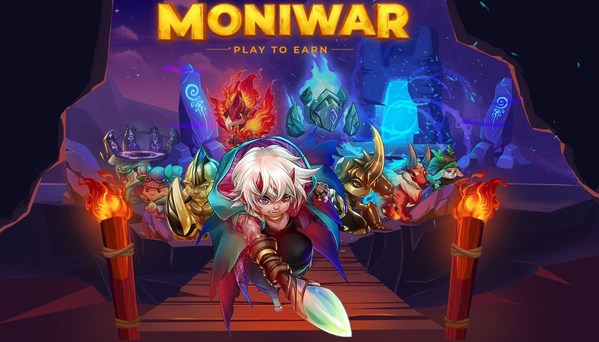 Moniwar is built on Blockchain and NFT.

Not out of the above wave, Moniwar was founded by a team of game programmers with 15 years of experience developing traditional games. By integrating blockchain and NFT technology into the game, Moniwar entered the NFT game market to bring Vietnamese games into the global gaming market.

MoniWar is inspired by the globally loved game genre Monsters & Puzzles. MoniWar game plot hinges on Lucas’s journey to avenge his father, King Abrazax, the ruler of The Lower Realm.

Legend has it that in the Iron Age, 1200 BC, the world was divided into three realms: Elysia Upper Realm, Soma Realm, and Naraka Lower Realm. In the Third Aeon Era, a fierce war between the Upper Realm Elysia and the Lower Realm Naraka opened up a "space-time" gap that allowed the monsters of Naraka’s Lower Realm to invade the Soma world. After that, the Upper Realm defeated the Lower Realm and its king, Azazel. Before disappearing, the pieces of Azazel’s corpse had turned into Metal Wood, Water, and Fire Earth monsters, directly ruling the lands on the physical plane. Lucas, the son of King Abrazax, who had to bear in the hatred for his father’s death, has assembled five legendary monsters. Together, they traveled to the land and captured the monsters to prepare for the final battle with Elysia, the upper Realm.

To participate in the game, players need to prepare the "Pets" you can purchase at MoniShop (MoniWar’s in-game exchange platform).

Next, players can download the game on Android & IOS apps or use the web version and register to play the game. Daily, players will participate in "diamond scan" challenges through the missions: explore the map, fight bosses, hunt pets, PvP match 3, participate in battles with other players …. Through each mission, the player can receive gifts with items (pets, items that help to upgrade pets) or tokens (cryptocurrency for in-game transactions.). In addition, Moniwar also created a system of regular tournaments for players to challenge themselves and compete against other players. Through these tournaments, the game will find great people to receive valuable rewards like pets or tokens to trade on NFT Marketplace.

For the NFT Market platform, players can exchange transactions with other players, join auctions, and look for opportunities to receive lucky gifts that can be "Pets" or items to upgrade their character in the game. In addition, the popular features of NFT platforms such as Mint, Farm, Staking…will also appear on MoniWar platform.

Thanks to its outstanding features and compelling storyline, MoniWar won the third prize in the final round of the "Game2Blockchain" contest held on August 22, 2021. The contest judges are all very famous experts in the field of Blockchain and NFT games like Trung Nguyen – Co-Founder & CEO Axie Infinity, Loi Luu – Co-Founder & CEO.

In the first round of the contest, representatives of the teams had 15 minutes to present about the project and answer the examiner’s questions. In round 2, each team has 1 minute to explain the main features of their project live on Facebook. The top 3 projects are evaluated based on ideas, products, gameplay, play for money, coding, technical development, etc… The event took place directly on Facebook with the participation of the 12 most notable and potential NFT game projects in Vietnam, Moniwar has excellently surpassed the criteria set out by the contest, honored to be named in the top 3 of the "Game2Blockchain" contest. It is expected to storm the Crypto community soon.

Learn more about MoniWar at: