HO CHI MINH CITY, Vietnam, Dec. 9, 2021 /PRNewswire/ — After 10 years, SpaceSpeakers has become the leading hiphop empire in Vietnam with countless achievements on the music scene. Particularly, in the past 2 years, the name SpaceSpeakers has been covered extensively in the media thanks to a series of large-scale projects. Recently, SpaceSpeakers Group was honored to receive an international "Inspirational Brand" Award of Asia Pacific Enterprise Awards (APEA). This is delightful news for SpaceSpeakers Group in celebration of the company’s 10th anniversary. 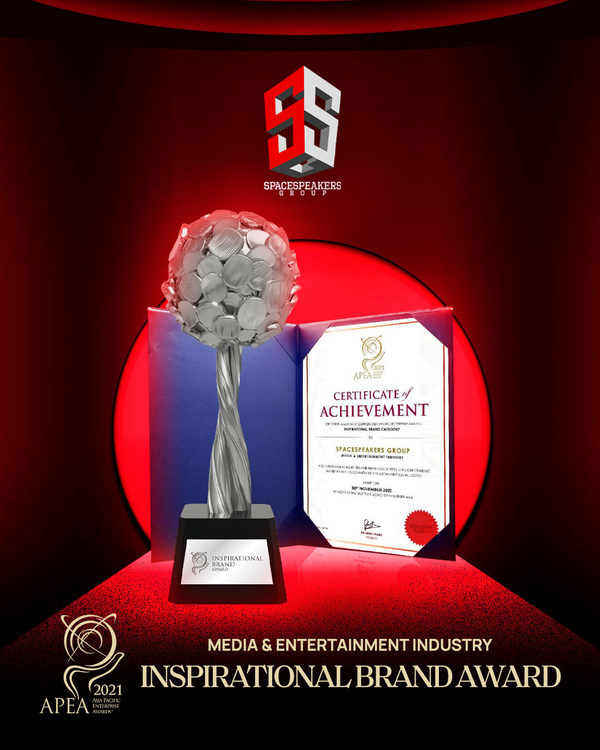 Founded in 2011, SpaceSpeakers is one of the pioneering music organizations pursuing Rap/hiphop and electronic music in Vietnam. In May 2020, SpaceSpeakers Group JSC officially went into operation that is headquartered in Ho Chi Minh City, whose artists are key members of SpaceSpeakers. The company’s main services include producing and releasing music, strategizing artist’s images and training young talents.

Asia Pacific Enterprise Awards (APEA) is an international award for leading entrepreneurs and businesses in the entire Asia Pacific region. The Inspirational Brand category is awarded to brands with strong transformations, promoting sustainability and good values for the community. The award is a recognition of SpaceSpeakers Group’s relentless dedication to the Vietnamese music market.

Achievements that make the name "SpaceSpeakers"

2020 is considered an outstanding year for SpaceSpeakers, especially for the two members Binz and SOOBIN. The hit Big City Boi (Binz x Touliver) ranked no.2 on the top Trending Youtube Vietnam and other countries’ as well, such as Canada, Australia and USA. The song quickly brought the name Binz to a new height and also won him a precious MAMA (Mnet Asian Music Award) for Best Asian Artist Vietnam. Shortly after, SOOBIN returned in a brand new image with EP The Playah and special edition The Playah (Special Performance). The title BlackJack (ft. Binz) reached no.1 on the top Trending Youtube Vietnam after releasing for a week, followed by impressive ranks on other streaming platforms. From music production to promotion, both projects were executed with supreme refinement to ensure the audience is satisfied with highest-quality performances.

2020 is also a breakthrough year for SpaceSpeakers with the presence of 6 members in the most popular TV show Rap Viet, taking over crucial positions from music director, judge to coach. It is no exaggeration to say that with SpaceSpeakers, Rap Viet has unlocked huge commercial success, as well as music achievements. Many recordings from the show, especially from Binz’s team, have reached no.1 on streaming platforms like Apple Music and Spotify; and all of them were mixed/mastered by producers from SpaceSpeakers. With the return in season 2, SpaceSpeakers is expected to produce higher-quality hits, while maintaining its status as one of the top music organizations with top hiphop artists.

Not only bringing Rap/hiphop closer to the public, SpaceSpeakers also uses music to bring value to the community. In 2021, SpaceSpeakers initiates the Muzik Dap Dich (#MuzikDapDich) campaign, which encourages the young art-loving community to use music as "a spiritual vaccine" and transmit them into positive energy. Specifically, the campaign’s practical goal is to support the frontline fighting against the COVID pandemic, by sending rice and other supplements to the misfortunates. The campaign has attracted a large audience to create interesting music videos, not only rappers or producers but also many amateur content creators. More than 3500 videos, 32 million views and more than 3 million interactions on Facebook, 10,000kg of rice donated, are impressive numbers of Muzik Dap Dich, proving the strong influence of SpaceSpeakers.

Undeniably, the outstanding development of SpaceSpeakers in the past two years is the result of untiring efforts. And as the team’s saying "Space boys neva sleep", all members will always move forward and be ready to conquer new heights.

On the occasion of its 10th anniversary, SpaceSpeakers has announced the activities that will be implemented in the near future, including: 10 years anniversary album, liveshow and #SSL project. After a decade with many hits that have taken the music industry by storm, this will be the right time for SpaceSpeakers to release a complete album, marking a memorable milestone in its musical journey. Besides, the spectacular liveshow that assembles all SpaceSpeakers members will undoubtedly be an event to look forward to. Lastly, the #SSL project remains a mysterious announcement. With a series of upcoming projects, SpaceSpeakers will continue to assert its position on the Vietnamese hiphop map.

Once again, congratulations to SpaceSpeakers Group on this prestigious award! Let’s look forward to the next top-notch music products from the members.