SEOUL, South Korea, July 26, 2021 /PRNewswire/ — Carima’s 3D printer DM400A has rapidly thrived in US and now the company is strengthening its foothold in the global 3D printing market seeking to diversify its industrial printer into the development cooperation for various photopolymer resins. 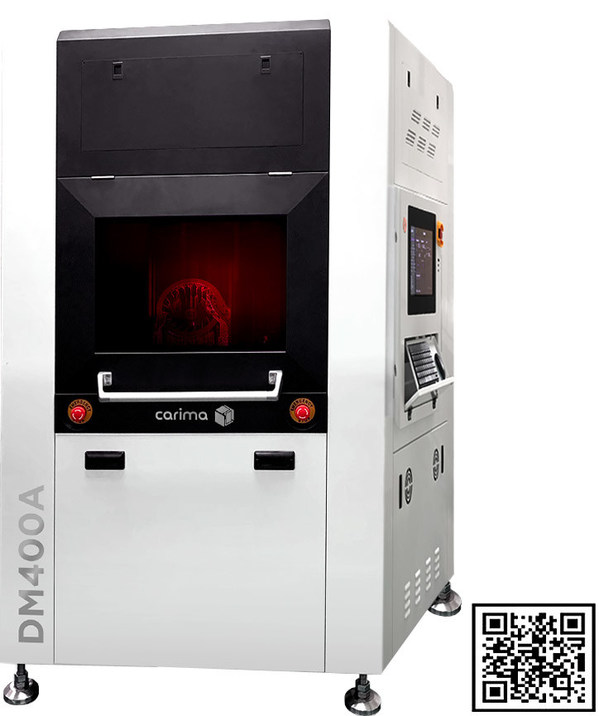 Recently, Carima successfully demonstrated the excellent printing quality of Elastic Tough Rubber using DM400A after several years of consecutive R&D together with major US photopolymer resin supplier, aiming to prototyping of elastic tough rubber material. Carima announced that they have already sold five units of DM400A to the world’s leading major manufacturer such as mattresses, aerospace manufacturer and defense contractors, and entered into additional negotiations on the sales of three units with other corporations in this year.

Carima is the South Korea’s first 3D printer manufacturer developing photopolymer DLP 3D printer, which is being introduced every year in the Wohler’s Report, so-called "3D Printing Industry’s Bible", as the South Korea’s No. 1 maker capable of competing with even global giants. Since founded in 2000, Carima has been growing its sales in domestic and oversea trades.

"The core solution is a smoothly overlapped projection area achieved by using dual 2K (2560 x 1600) DLP light engines with high-resolution and high-intensity. While the DLP 3D printers generally adopt bottom-up printing," said one of the company officers, "DM400A takes advantages of the Top-Down printer – the release force is not generated and the printed outputs are not working against gravity, which makes it possible to cover a large build area and employ high-viscosity photopolymer materials. Also, the resin tank is also easily replaced. It will allow a variety of corporations to enjoy the freedom of developing photopolymer materials with a large build size DLP 3D printer."

Many DLP 3D printer makers have attempted to develop a 3D printer with a "Dual" DLP optical engine in worldwide demand, however only a part of them have achieved a goal because of various obstacles. Carima is also honored as one of the companies succeeding in the commercialization.

Wohlers Report 2021 reveals that global 3D market capitalization is about 2,000 million US dollar, in which the photopolymer materials account for more than 30% of the total market.

Carima will run more projects to develop photopolymer 3D printing materials with other companies referring to their successful journey with the first partner. It is their global marketing strategy that Carima offers DM400A together with a variety of photopolymer materials to customers who are introducing industrial 3D printing technology to their existing methods of production in their fields.

"DM400A boasts Carima’s next generation industrial 3D printing technology and enables us to respond to a rapidly changing market, where precision and speed are everything," said Lee Kwang-Min, the Vice President of Carima. "Sustainable growth will maximize the synergistic business opportunities for our future partners." He also expects that Top-Down DLP 3D printer DM400A will remarkably contribute to improve the profit ratio of their clients owing to its capability of the multi-product mass production.

Meanwhile, Carima has developed and launched their newest model LM1 designed for beginners considering rapid sales growth of LCD 3D printers in dental, jewelry and figure market, and is preparing for full-scale development to establish a lineup of various LCD 3D printers.

Lastly, while the controversy surrounding the harmfulness of 3D printing materials has once again come to the fore, Carima recently has developed Non Toxic CMYK resin as the solution and is supplying it to the market. In particular, it has been tested and classified as non-irritant and no harmful chemical substances were detected, which makes it suitable for educational use and printing figures and toys safely. Carima has engineering and dental resins as well, so plans to sell LM1 with them at a reasonable price.

Four the Win – GIGABYTE Wins Big at iF Design Award 2022