All-new exclusive deals to celebrate the partnership with SKYWORTH fans, including the chance to win full cash back on TV orders during the European Cup

HANOI, Vietnam, June 12, 2021 /PRNewswire/ — SKYWORTH proudly becomes Juventus FC’s Official Partner by bringing its own "Lead the Future" motto alongside Juventus FC’s "Live Ahead" brand ethos to life; uniting with loyal football fans from all around the globe!

This June 8th, SKYWORTH will be holding a signing ceremony with world-leading Italian Serie A football club, Juventus FC, ahead of a year-long brand partnership in Beijing, China.

The perfect collaboration stems from the all-round fit between the two brands. As leading players in their respective fields – SKYWORTH, with its "Be Innovative, Be Bold" brand spirit, alongside Juventus’ faith of "Perseverance Forever, Ambition Wherever", are both founded in the commitment to break boundaries, achieve greatness, and lead the future. The partnership will propel SKYWORTH and Juventus to excel and reach new heights. 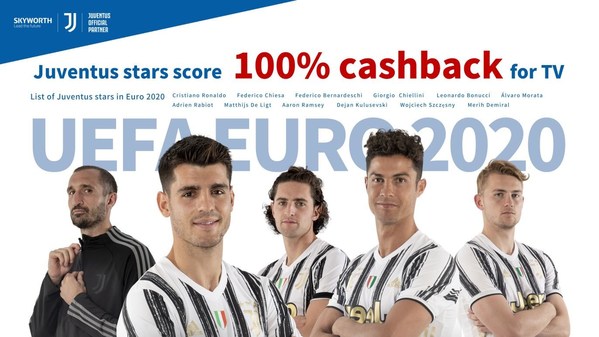 In line with the theme of "Partner Together, Lead the Future", SKYWORTH and Juventus will be rolling out multiple activities to celebrate their upcoming football matches with global fans.

Launching today until the end of Lega Serie A 2022, the brand partnership is also expected to see a range of co-branded content launched across global platforms and throughout Juventus home matches. To celebrate, SKYWORTH is giving away free VIP tickets to join the Juventus team on a match tour to lucky fans. Details will be unveiled on official SKYWORTH Facebook, Twitter, Weibo, and WeChat channels.

In light of the upcoming European Cup from June 12th to July 12th, SKYWORTH will be holding large-scale activities including its "Juventus Stars Score for SKYWORTH!" , "The more people buy, the better the price"events.

SKYWORTH is now one of the world’s Top 5 TV brands. A leading global television manufacturer and pioneer in big-screen AIoT, SKYWORTH TV boasts years of experience in advanced home entertainment solutions since 1988. Today, SKYWORTH’s proprietary Swaiot™ technology seamlessly connects to an entire AIoT/IoT ecosystem; enabling users to view, control, and manage all smart-home devices from the comfort of their TV screens.