XI’AN, China, May 24, 2021 /PRNewswire/ — As May 19th, the China Tourism Day approaches, the "Meet Your Shaanxi Dream, Traveling in Shaanxi" offline activity is held from May 14th to 21st on schedule by Visit Shaanxi, the overseas English social media official account of Shaanxi’s Provincial Department of Culture and Tourism, as part of the cultural and tourist promotion campaign towards Hong Kong, Macau, Taiwan and foreign countries and regions in the background of preventing and controlling the epidemic on a regular basis. Six online celebrities from Russia, South Korea and Turkey are participating in and shooting of photos and videos of characteristic cultural tourism products of Shaanxi, which will be posted on Chinese and foreign media. This activity will increase the popularity of the brand "Cultural Shaanxi" and prepare Shaanxi for the resumption of inbound tourism. 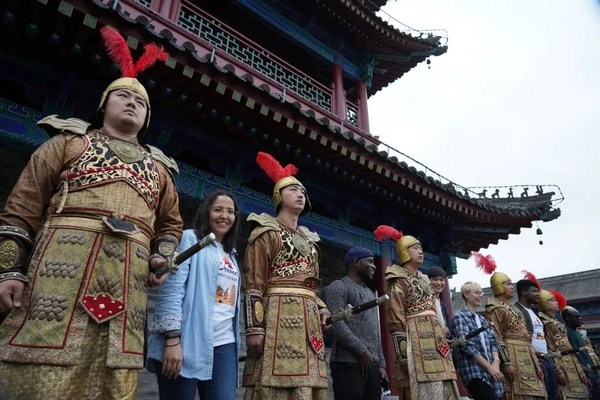 The photography team, composed of the overseas online celebrities, will interact with the artists at the Datang Everbright City, learn to make dumplings at the famous Defachang restaurant, ride bikes on the city wall, learn to perform the shadow puppet show at the Former Residence of Gao Yuesong, watch performances at the Huaqing Palace and the Tang Paradise and learn to make Terracotta Warriors. Photos, texts and videos about their fun experience will be released on Chinese and foreign media accounts such as Visit Shaanxi.

By the end of April 2021, Visit Shaanxi had had altogether 714,000 fans worldwide. Among them, over 585,000 were fans on Facebook, over 92,000 on Twitter and nearly 36,000 on Instagram. There had been more than 5,060 text or video posts, more than 40.77 million views and more than 2.35 million times of interaction. Online and offline activities are held, such as Resurrecting the Terracotta Warriors, Mr. Bing’s Travel Notes, 2048 Little Games, Christmas Crossword, Shaanxi Spring Festival Atmosphere Competition, Lantern Festival Riddles, Celebrating Chinese New Year by the Yellow River, Shaanxi Impression, as well as Traveling in Shaanxi. Shaanxi has won an "Overseas Communication Excellence Award" organized by the People’s Daily and ranked third in the Top 10 Provincial Cultural and Tourist New Media International Communication Index List for March 2021 issued by the Cultural and Tourist Industries Index Laboratory co-organized by the Chinese Tourism News, the Chinese Public Opinion Investigation Laboratory under the Chinese Academy of Social Sciences and the Alibaba Group, which proves that Shaanxi Provincial Department of Culture and Tourism has achieved remarkable results in the overseas publicity campaign via overseas social media.