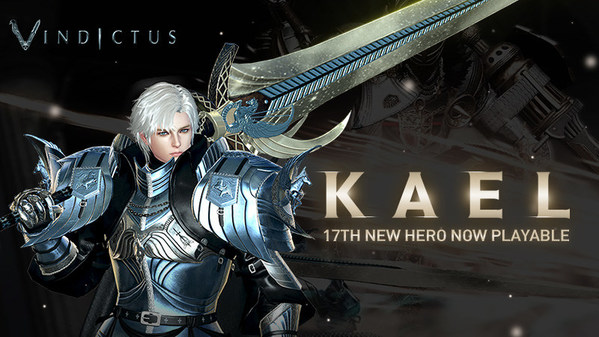 Vindictus is an action MMORPG that launched in 2010, making 2020 its 10th year of service. It features battles that demonstrate impressive action and powerful impact, as well as interesting story and beautiful background music.

Kael, its 17th hero, is a character that uses the sword staff, specializing in both pointed stabs and wide-ranged slashes. He can even inflict post-multi-hit wounds upon his enemies following key strikes. Should he see success, he can then block oncoming attacks and follow up with a devastating counter. Such disciplined yet relentless assault through myriad multi-hit attacks and practiced parries makes him an exciting character to play.

Blessed with good fortune, charm, intelligence, and skill in battle, Kael was granted the position of knight in the royal guard. However, a chance encounter with a commoner revealed his wonderful world was built on the misfortunes of the destitute. Eyes now opened to the ugliness in the world, Kael joined their resistance, fighting as a noble knight by day and battling as a radicalized citizen at night. You can find more detailed information on Kael, the crusader who fights for justice, on Kael Promotion Page.

Vindictus is holding events to celebrate Kael. Through Kael’s Celebratory Special Package Event, all players who create a Kael character and reach Lv. 10+ with him during the event receive an exclusive Kael outfit. Through the Raw Recruit Reward Event, new characters receive support for rapid growth. Also, through the Discord Socialite Event for the Official Vindictus Discord channel, players who join the channel during the event receive the limited outfit part, Sweets on the Brain.

Furthermore, Vindictus added various content with its latest update. You can learn about the details from the full patch notes.