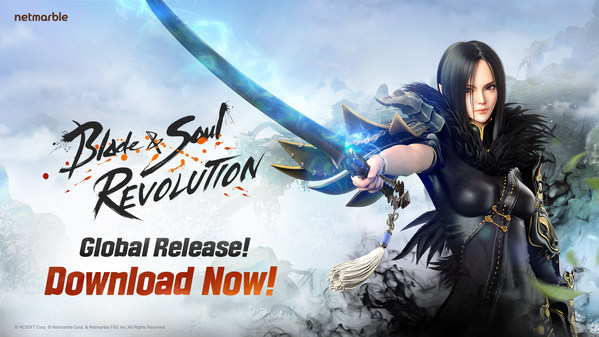 Players new to the Blade & Soul IP can look forward to an updated and streamlined experience in Blade & Soul Revolution, as in-game enhancements to the in-game hunting mechanics, player balance, and the pace of a player’s growth have been made to better suit the sensibilities of Western players. The game offers unique features such as Windwalk and other martial arts actions that no other game provides.

At launch, players will have access to five professions – Blade Master, Destroyer, Kung Fu Master, Force Master, and Summoner. Additional information on what to expect at launch can also be found on Blade & Soul Revolution‘s official website. To celebrate the launch, Netmarble prepared 7 days’ daily check-in event for four weeks with various rewards including Superior Pet Peanut, Heroic Pet Chest and many others.

"Developing Blade & Soul Revolution was highly enjoyable. Thanks to our team’s background in developing AAA-quality mobile games like Lineage 2: Revolution and A3: Still Alive, we were once again able to take a famed IP known by MMO and RPG players across the world and create an authentic Blade & Soul experience that anyone can enjoy," said Andy Kang, Executive Producer of Netmarble.

Blade & Soul Revolution is an Open World Mobile RPG that translates breathtaking cinematic stories of revenge based on the PC online game of Blade & Soul. The game stays true to its PC roots with a high level of full 3D graphics and large-scale content that has been revamped to perform flawlessly on mobile devices. It displays eastern-fantasy world with stunning full 3D graphics backed by the Unreal Engine 4, offering massive real-time faction battle and incomparable hands-on action experience.

More information can be found at http://company.netmarble.com