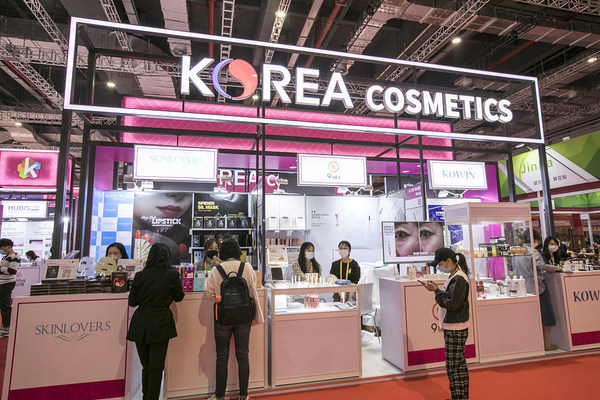 Many South Korean cosmetic enterprises expanded into China’s cosmetic market through the China International Import Expo (CIIE), which is viewed by many multinationals as an important gateway to the Chinese market.

Amore Pacific, a well-known South Korean cosmetics group, has participated in three editions of the CIIE. At the third one, the group’s exhibition area was doubled from the previous edition and many new products were launched.

Gao Xiangqin, president of Amore Pacific in China, said that China, as a significant market for leading fashion trends, still has huge domestic demand. The CIIE opens up significant consumer potential for the world.

"We have successively participated in the CIIE for three consecutive years. We found two or three partners in every edition. The intended turnover reached in the CIIE accounted for 30 percent of our brand’s annual sales in China," said Cao Ye, chief representative in China of UNI Cheju.

"Last year, many South Korean companies overcame difficulties brought by the COVID-19 pandemic to attend the CIIE in November. They have become our important partners in times of trouble," said Sun Chenghai, deputy director-general of CIIE Bureau, at the event.

According to an announcement made at the online meeting, Hyundai Motor Group, South Korea’s largest automaker, will bring its three whole vehicle brands, as well as auto supplier Hyundai Mobis, to the expo this year, and will likely become the largest enterprise exhibitor in terms of exhibition area.

The third CIIE, which was held in November last year, attracted enterprises from 124 countries and regions, covered an exhibition area of 360,000 square meters and witnessed debuts of 411 new products, technologies and services. A total of $72.6 billion of intended deals were made.

Preparations for the fourth CIIE, which will be held in Shanghai from Nov 5-10, 2021, are well underway. Hundreds of enterprises have signed up to attend.

Companies interested in attending the fourth edition can book a spot through this registration link:
https://www.ciie.org/ciie/f/book/register?locale=en