MANILA, Philippines, March 18, 2022 /PRNewswire/ — Philippine-based social entertainment network Kumu has been steadily growing in both popularity and utility since its initial release in 2018, quickly becoming a staple on smartphones all over the world. The app has served not only to connect people to one another regardless of location or distance, but also to showcase talent in its plethora of genres—cooking, lifestyle, gaming, and especially music, which is one of Kumu’s most successful categories. 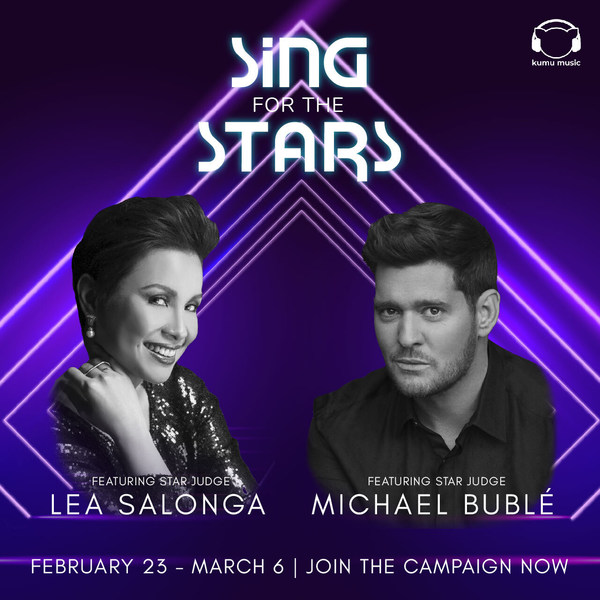 Sing For The Stars Official Poster

Enter Sing for the Stars, a global singing contest conducted entirely via livestream, which takes away the long lines and all the legwork it takes for fresh talents to get discovered. Aspiring stars get to perform without setting foot outside, and pretty much at their leisure. Heating things up is the rigorous selection process, narrowing down the top 100 to a mere 12. The lucky dozen will then battle it out for a shot at $10,000 in cash, a one-year record deal with Warner Music Philippines, a live mini-concert on Kumu, and one-on-one coaching with celebrity judge and four-time Grammy winner, Michael Bublé.

Also gracing the judges’ panel is Laurence Olivier and Tony Award-winner Lea Salonga. In a global press conference held last March 11, 2022, the two stars sat down with TV personality KC Montero, who’s also Kumu’s Vice President of Content, to talk about the role of social media in staying connected, their advice to aspiring stars, and their first dip into competitions on an entirely virtual panel.

They were also joined by the company’s Senior Vice President for Strategy and International Affairs, Anand Roy. "Thanks to technology, geography is now history," quips Roy. "Kumu is at the forefront of bringing down barriers between people. And as ‘a social network’ for musicians, by musicians, we feel that it’s only right that we create an opportunity that enables ‘all artists everywhere’ to really shine."

By coming together and conducting an entire season of a musical face-off, Kumu, Warner Music Philippines, and the judges hope to help fulfill the social entertainment platform’s primary goals of creating meaningful connections and fostering inclusivity in creative spaces. "I know so many artists who gravitated to Kumu in particular," says Salonga. "It’s such a natural fit, and kind of a godsend, really, so that artists can keep doing what they love."

"I’m sure we’re going to find someone who makes us just go, ‘Wow,’" predicts Bublé. "I cannot wait for these artists to enter my life." For both judges, this project with Kumu is a first, even for them—making this contest all the more exciting to follow.

So between breaking borders and finding the next generation of stars, Sing for the Stars is the thing to watch right now—or, at least, starting March 19 at 9:00 PM PHT, when the judges will be finalizing the last four of 15 hopefuls and officially setting off the tuneful tournament.

Download Kumu for free from the App Store, Huawei App Gallery, and Google Play to see some future stars in action. Sing For The Stars is open to all nationalities. Next season, it could be anyone streaming to stardom.