NFT’S WILL PUT AN END TO COUNTERFEITING OF RARE COLLECTABLES

LOS ANGELES, July 28, 2021 /PRNewswire/ — Blues Rock titan Joe Bonamassa known as one of today’s foremost experts and collectors of rare Gibson and Fender guitars will be auctioning his sought after 1959 Gibson Les Paul guitar from his private collection this Saturday, July 31st. Hosted by Heritage Auction House, the lot is billed as an "NFT collection" which will also include a tokenized original song recorded by Joe. For more than 25 years, Joe Bonamassa has been a collector and enthusiast of rare vintage guitars and accessories and is widely respected as an aficionado. Bonamassa is taking his knowledge and artistry of guitars and bringing them together for what promises to be a groundbreaking NFT. 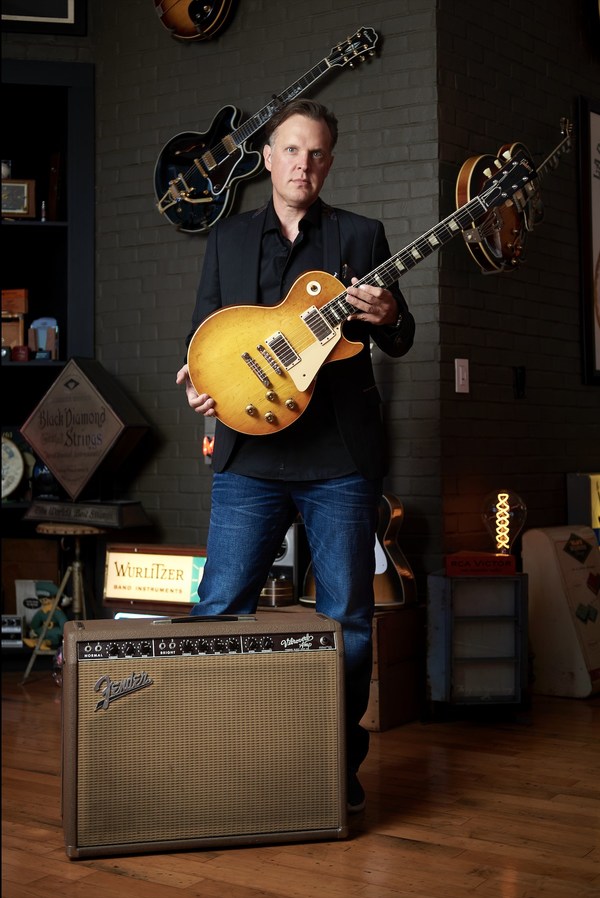 Bonamassa is setting the bar for the future of collectibles. Taking his collector’s point of view, expertise, and experience on tv shows such as Storage Wars as an authenticator to validate the true market value for rare and vintage guitars. Joe takes this NFT to the next level by combining highly valuable physical and digital assets, making this a very desirable and collectible investment. "What I like about non-fungible token is ownership of something special and unique. All people want is something that nobody else has… ours is not just something that’s digital, it’s tangible."  Said Bonamassa, which is why he  decided to add a rare asset that has increased value for over 62 years to his upcoming auction from his personal collection.

Bonamassa has earned a great deal of respect for the collection that he has amassed over the years and has a passion for the pieces he has acquired. The 1959 Gibson Les Paul Standard and 1963 Fender Vibroverb Amp are two of Bonamassa’s most prized possessions. These two pieces will be part of this Saturday’s one of a kind lot with  Heritage Auctions, where Joe and longtime business partner Roy Weisman are changing the rules of the NFT game to offer one of the most intriguing, high value offers out there.

What truly raises the stakes in the world of art and music, is the value. Here the reserve bid is worth the gear alone, yet Bonamassa is giving a once in a lifetime opportunity to ALSO become the sole owner of the master and publishing for one of his songs, "Broken Record." It’s an innovative move that shows just how ahead of the game Joe’s team is. Always on the quest to evolve artistically while simultaneously challenging the infrastructure of the music industry, and a true musical pioneer, Joe has done it again. The auction bidding ends on July 31.

Bonamassa went to Oceanway Studio in Nashville in May 2021 to record a special song that he wrote just to be used for this special NFT. The song "Broken Record" is an ode to taking control, just as Bonamassa is doing with his NFT concept. He shares the song’s origins, "it’s the same complaints. I’m going to lose weight. I’m going to do something with my life. I’m going to make changes. And they never do… and they sound like a broken record. I do that too. I decided to write a song about it. I’ve wanted to do this for a while, and when the idea came up for this project with Heritage, I thought ‘I should write that broken record song,’ and I did."

"Broken Record," along with the NFT auction, is a movement that’s meant to inspire not only artists and creators, but the everyday person. It’s a reminder for people to hold themselves accountable, stand up against the status quo, and make strides to be the best that they can. With this NFT, Bonamassa and Weisman didn’t want to sound like a broken record doing the same thing as everyone else who had jumped on the bandwagon. Instead, they wanted to take hold of the reins, make it their own, and make it the best offering out there.

Bonamassa calls this lot "the one-song record company" because it totally transforms the way musicians can make a business from their intellectual property. Weisman elaborates: "That is what this NFT concept gives artists — the opportunity to raise capital on an independent basis that will allow them to overstep the so-called gatekeepers of the music industry."

"One of the things that I like about being an independent artist is that Roy and I came up with this idea," Bonamassa says. "We didn’t have to run it up any sort of chain of command. It was like, let’s do this because it feels right. And it’s the next logical step in how independent artists are going to be on equal footing with major labels."

Weisman says "we’re now truly in a unique time in the music business where it is completely just supply and demand. People can find artists online anytime, people can buy their music, investors can invest in them without an artist having to go through a typical major label or even a large independent label system that is heavily weighted against artists from the start."

This history-making auction from the music-business revolutionary is far from routine; then, nothing Bonamassa does is ever ordinary.

Joe’s auction lot is filled to the brim with highly collectible items, including not only some of the most prized musical instruments on the planet, but pairing them with a series of certificates of authenticity as cutting-edge non-fungible tokens (NFTs). The type of guitar has been used by rock royalty such as Keith Richards, Jimmy Page, Eric Clapton, Mike Bloomfield. The instrument with the "unmatched deep, throaty sound," as David Schiller writes in his book Guitar, was the ax that built rock and roll.

Non-fungible tokens are changing the business world and Bonamassa’s clever use of the new technology is now allowing other artists to build what is their own business. Bonamassa’s auction is unique and stands to reshape how musicians make and sell their art. This incredible lot includes 13 items individually tokenized on the Ethereum blockchain. Each physical item will have a digital NFT component. This lot is a dream come true for any serious collector of vintage gear or NFT investor looking to diversify their portfolio.

It should surprise no one who follows Bonamassa’s career that he’s leading this revolution. No guitarist has ever received as much coverage in the music and business media as the two-time Grammy Award nominee who has topped Billboard’s Blues chart 24 times – at only the age of 44, no less. Only last year, in fact, Forbes heralded the guitarist for "Taking Control Of His Business, Building A Brand And Investing In Himself."

Bonamassa, a wunderkind who opened for B.B. King when he was just 12 years old, learned early on never to trust the industry: His 2000 debut A New Day Yesterday, released on a Sony subsidiary, was a critical smash, with Billboard hailing the comer as "a bold talent who rises above narrow radio formatics." Problem was that major labels have no time for bold talents who don’t get played on the radio. Bonamassa and Sony parted ways.

For many musicians, that would have been the end of the story. For Bonamassa, it was only the beginning of the beginning: In 2002 the guitarist and his longtime manager and business partner Roy Weisman created J&R Adventures – a self-contained label, management, marketing and concert promotion company. Which has meant that for the last 20 years, they haven’t had anyone looking over their shoulder, anyone telling them what to do or where to go, anyone telling them no.

"We go against the grain by nature, and that’s how we’ve been successful," Weisman says. "I’m not really looking to get the input of the industry because quite frankly, I think the mainstream industry won’t like independence. And with this auction, we’re going to show the world how to merge their copyrights, their intellectual property and sell it directly to an investor without a middleman like a major record company taking a major piece of the money and leaving them without any core assets. Now with the NFT, artists have an opportunity to build capital for themselves to then build what is their own business. And that is a beautiful thing. It’s a game-changer."

The way both men tell it, the idea of selling the guitar and amp and the song in a single auction lot was an easy one, just another inevitable next step in the evolution of their revolution. It took Weisman and Bonamassa all of 20 minutes to settle on the concept and its eventual execution, which resulted in a full-blown studio session during which the guitarist recorded something of which he’s extraordinarily proud … which no one, outside of the winner, might ever hear.

"And in the end, we came to the conclusion that if we’re going to do this, let’s make a splash. This is going to be really cool."

To prospective auctioneers, Joe encourages people to get in on the action. "Enjoy your NFT and thank you very much for participating. And by the way, show this to all your friends. Hell, you own it!"

ITEMS IN THIS LOT:

4 Concert Tickets & 4 Meet & Greet Passes to One Joe Bonamassa Show every calendar year.
– Tickets and M&G passes must be used for the same show.
– Where Joe Bonamassa is the sole headline artist (no festivals or special events).
– Only if there is a scheduled Meet & Greet for the applicable show.
– For as long as and until Joe continues to actively tour.
– All costs to attend the show (travel, accommodations, etc.) other than the tickets and passes are the responsibility of the NFT owner.

• 1 Digital Photo Book
– Includes 6 photos of Joe (in the studio and with the guitar & Amp)
– These will be delivered digitally as JPEGs.
– NFT owner will not own copyright of images

A Personal "Nerdville" Museum Tour and lunch with Joe Bonamassa
– Choice of either Los Angeles or Nashville location
– Date and Time Subject to Joe Bonamassa’s Schedule
– Tour for Purchaser and 1 guest (2 people MAXIMUM)
– Lunch will follow the tour at Joe’s residence
– Subject to signature by Purchaser and guest of a confidentiality agreement
– No filming or recording of any nature permitted
– This is a ONE TIME ONLY event
– All travel, accommodation and other expenses are the sole responsibility of the Purchaser

As a professional musician for over 30 years, Joe Bonamassa continues to blaze a remarkably versatile artistic trail, and amass an authentic, innovative, and soulful body of work. Bonamassa’s career began onstage opening for B.B. King in 1989 when he was only 12 years old. Today, he is hailed worldwide as one of the greatest guitar players of his generation and is an ever-evolving singer-songwriter with over 40 albums to date all under his own label, J&R Adventures.

Joe’s latest album, "Now Serving: Royal Tea Live From The Ryman" is available now for streaming, CD, DVD and Blu-Ray. It will also be released on Double LP July 9th. The DVD includes a film introduction narrated by actor Jeff Daniels. To order, visit shop.jbonamassa.com. The stellar performance from one of the world’s most legendary venues includes 12 incredible live tracks, featuring the best from his latest studio release Royal Tea,Joe’s 24th #1 record on the Billboard Blues chart, which was recorded at Abbey Road Studios in London. It also includes 3 electrifying tracks from his 20th anniversary album A New Day Now.

Joe is also hitting the stage again, with a string of tour dates across the US for summer and fall, starting the end of this month in California, with two incredible nights set for the Red Rocks Amphitheatre in August before jumping back to the Ryman Auditorium to kick off the autumn dates in October. For tickets, visit https://jbonamassa.com/tour-dates/.

For breaking stories, follow us: HA.com/Facebook and HA.com/Twitter. Link to this release or view prior press releases. 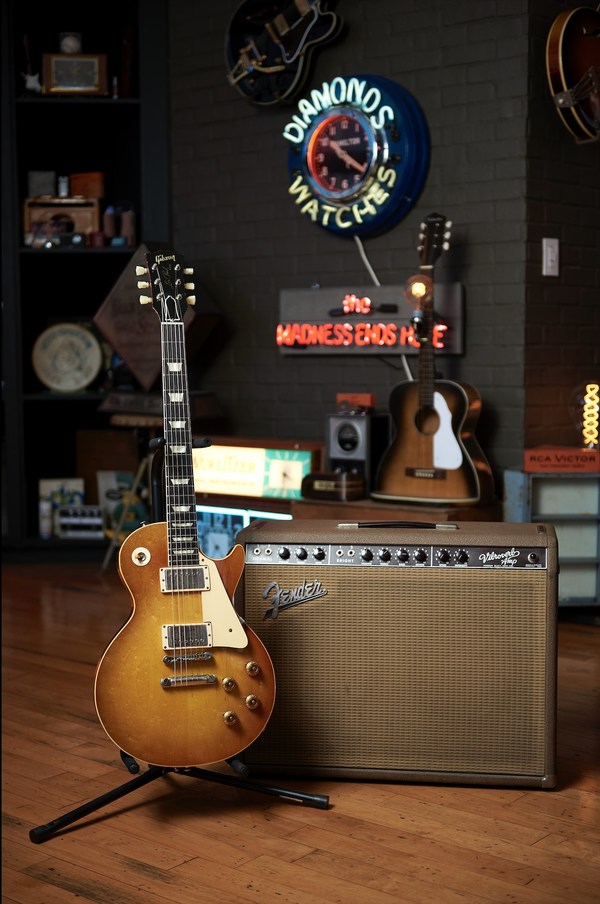