It hopes to clean up further the online environment and crack down on the dissemination of illegal content involving wildlife through content review and innovation. 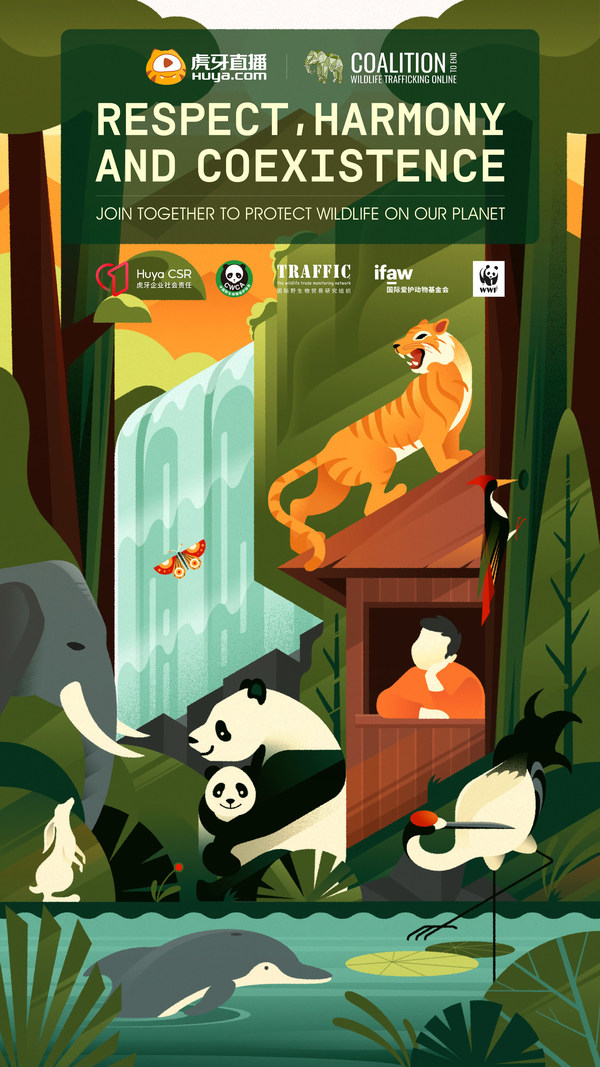 To enhance the risk control ability of the platform, prior to joining the Coalition, Huya held "Respect, Harmony and Coexistence" online seminars in collaboration with TRAFFIC, to raise their employees’ awareness of the illegal wildlife trade. More than 1,000 people on Huya’s security team were trained by experts in terms of China’s Wildlife Protection Law and the identification of commonly traded wild animal products.

Huya combines technology and manual review to crack down on illegal wildlife-related content in livestreams. Through image/voice recognition and big data, content involving wildlife and wildlife products appearing in live broadcasts can be identified automatically and immediately cut-off. Any account found to be propagating illegal wildlife-related content could face a long-term or even lifetime ban from the platform.

The partnership will also provide Huya with access to the Coalition’s extensive sample library, which will be used to develop AI identification models for wild animals and plants, further strengthening review and prevention capabilities.

Huya will also coordinate with judiciary authorities to crack down on illegal activities when illegal hunting and trading is livestreamed on the platform.

"We are delighted to join the Coalition on the special occasion of World Environment Day. We will work with our industry partners to fight the illegal trade of wildlife online and protect nature. In the future, we will continue to regulate the daily stream content of anchors through the platform, actively disseminate wildlife protection messages to our anchors and viewers, and popularize relevant knowledge, contributing to the protection of the earth environment," said Li Meng, Senior Vice President of Huya.

Against the backdrop of the increasing public attention the livestreaming industry has received, Huya has actively shouldered its corporate social responsibilities while strengthening its core business. For instance, having developed the "Livestreaming empowered" mode, Huya also launched a series of independently produced wildlife protection shows.

In April 2020, Huya joined with The Chinese Sturgeon Research Institute to broadcast the release of Chinese sturgeons back to the Yangtze River, which was viewed by over one million people.

In the future, Huya will launch more science livestreaming shows related to wildlife conservation, as well as encouraging livestreaming hosts to pass on knowledge to audiences and raise public awareness of protecting wild animals and plants.

HUYA Inc. is a leading game livestreaming platform in China with a large and active game livestreaming community. The Company cooperates with e-sports event organizers, as well as major game developers and publishers, and has developed e-sports livestreaming as one of the most popular content genres on its platform. The Company has created an engaged, interactive and immersive community for game enthusiasts of China’s young generation. Building on its success in game livestreaming, Huya has also extended its content to other entertainment content genres. Huya’s open platform also functions as a marketplace for broadcasters and talent agencies to congregate and closely collaborate with the Company.