KUNMING, China, Aug. 26, 2020 /PRNewswire/ — On August 26, 2020, Go-Yunnan launched the online poll titled "Yunnan 2020: Where Do You Wanna Go Most in Yunnan?". Organized by Yunnan Tengyun Information Co., Ltd., the event gives a text-and-graphic introduction to the unique scenery and cultural features of 16 cities and prefectures in Yunnan, in a bid to engage those who love traveling. 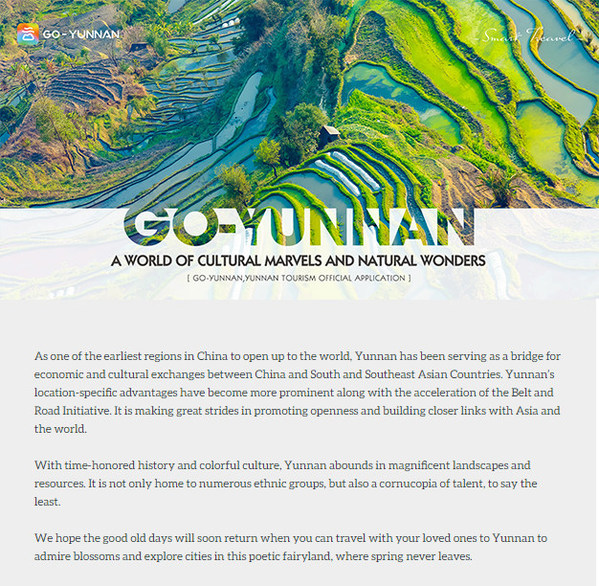 Yunnan 2020: Where Do You Wanna Go Most in Yunnan?

Yunnan Province, referred to as "Yun" or "Dian" for short, is located on the southwestern border China and at the junction of East, Southeast and South Asia, with a boundary line of about 4,060 kilometers. It is one of the most biologically diverse areas in China thanks to its mountain-plateau terrain, significant elevation difference and noticeable vertical climate belt. Known as the "Kingdom of Fauna" and the "Kingdom of Flora", Yunnan Province currently ranks first in China in terms of biodiversity-related indicators. Its forest coverage rate stands at 60.3%, one of the highest in the country.

Yunnan, which is also internationalized on a daily basis, is China’s gateway to Southeast Asia and South Asia. As China’s "Belt and Road" initiative is well underway, Yunnan is striving to build a new pattern of all-round openness with its influence reaching as far as South and Southeast Asia. Now the ever-revolving province is on a fast track to internationalization.

The poll aims to not only boost Yunnan’s fame, but also benefit tourists at home and abroad with the achievements of Yunnan’s smart tourism transformation and upgrading through the "Go-Yunnan" program. In addition, by soliciting the opinions from the general public, the poll will more efficiently guide tourists in their travels in Yunnan, while paving the way for the upgrade of "Go-Yunnan" and the next phase of tourism promotion.

Yunnan has long been known for its stunning and breathtaking landscape: the Three Parallel Rivers, the Yangtze (Jinsha), Lancang (Mekong) and Nujiang (Salween) rivers, rolling and roaring among steep mountains, nine alpine lakes such as the Dianchi and Erhai lakes, the magnificent Meili Snow Mountain, and the lush and mysterious tropical rainforests. Come rain or come shine, we are waiting for you in Yunnan.