BERLIN, Sept. 7, 2020 /PRNewswire/ — Digital incumbents increasingly face new and dynamic competitors from around the world. While countries such as USA, Sweden and Singapore are often perceived as digital champions, a new study indicates that they are not necessarily dynamic Digital Risers. Only Singapore has managed to improve its relative position slightly over the last three years. In contrast, the USA and Sweden have actually lost ground over the same period. "We are in the middle of a digital revolution that is very likely being accelerated by the Covid-19 pandemic," says Professor Philip Meissner of the European Center for Digital Competitiveness by ESCP Business School Berlin campus. 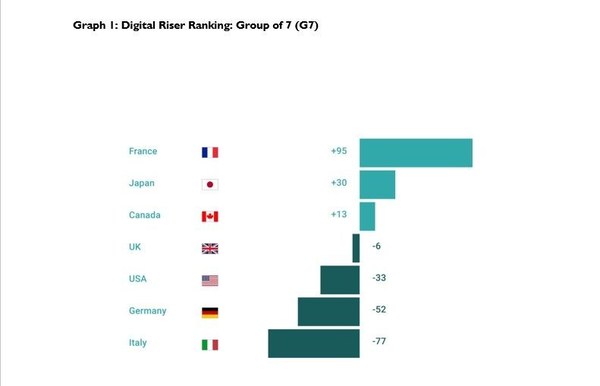 Within the G7, France was able to advance most in its relative digital competitiveness between 2017 and 2019, which makes the country the top "Digital Riser" in this group; conversely, Italy and Germany decreased most within the G7. This is the result of the Digital Riser Report 2020, devised by the European Center for Digital Competitiveness by ESCP Business School in Berlin. The report analyses and ranks the changes that countries around the globe have seen in their digital competitiveness over the last three years based on data from the Global Competitiveness Report issued by the World Economic Forum (WEF).

The ranking also reveals clear dynamics regarding the two global digital superpowers. It shows that China has gained significantly in digital competitiveness, while the USA has lost out over the same time period.

The top Digital Risers all had one thing in common: they have followed comprehensive, swiftly implemented plans along a long-term vision around digitisation and entrepreneurship. France’s example shows that governments that invest heavily in start-ups and employ lighthouse projects such as La French Tech can greatly increase their country’s digital competitiveness in a short timeframe.

ESCP Business School was founded in 1819. The School has chosen to teach responsible leadership, open to the world and based on European multiculturalism. The School has campuses in Berlin, London, Madrid, Paris, Turin and Warsaw. 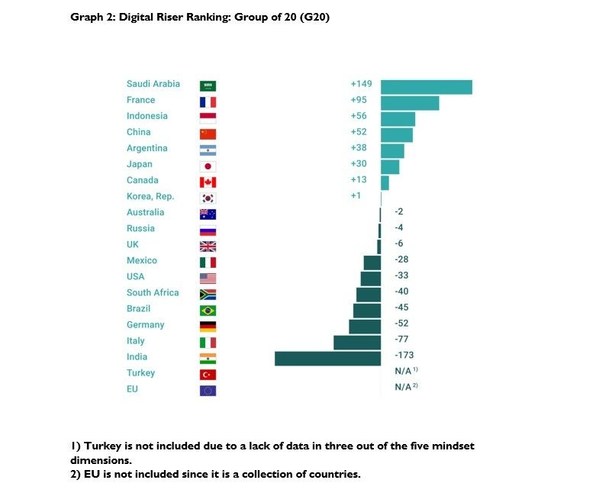 (c) ESCP. Graph 2: Digital Riser Ranking: Group of 20 (G20). 1) Turkey is not included due to a lack of data in three out of the five mindset dimensions. 2) EU is not included since it is a collection of countries.