– LFP batteries are more affordable, durable, sustainable and safer than competing solutions, and they do not require cobalt, nickel, and other hard-to-obtain minerals.

– The industrial spin-off will draw on 25 years of production experience to build a 16 GWh factory in Serbia, which has one of the largest lithium deposits in the world.

– ElevenEs has now secured investment from EIT InnoEnergy, a European early-stage investor in other successful battery gigafactory projects, including Northvolt and Verkor.

– EIT InnoEnergy is leading the industrial stream of the European Battery Alliance, a European Commission initiative to build a strong and competitive European battery industry.

SUBOTICA, Serbia, Oct. 28, 2021 /PRNewswire/ — By 2030, Europe will need 14 times more batteries than it produces today. This is due to the growth of electric mobility and the energy storage market, which requires batteries to stabilise energy systems, especially given the growing share of renewable energy. Therefore, Lithium Iron Phosphate (LFP) batteries, which combine the advantages of long life, affordability and safety, are gaining an increasingly stronger position in the rapidly growing battery market. 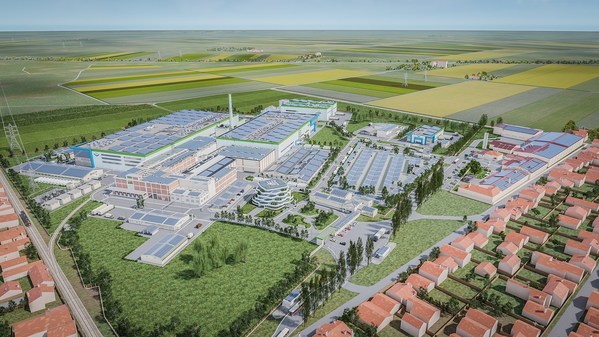 Visualization of the ElevenEs production plant in Subotica, Serbia.

ElevenEs, an industrial spin-off of the multinational Al Pack Group, which specialises in aluminium processing and has been operating on the packaging market for 25 years, has developed its own technology to produce lithium-iron-phosphate batteries that are more sustainable and efficient. The company, which has been conducting R&D into LFP lithium-ion batteries since October 2019 has just recently opened an advanced research and development centre in Subotica, Serbia, where it employs an international team of engineers and scientists.

"LFP cells last more than twice as long as competing chemistries, they can be recharged up to 6,000 times, charge faster, can be repeatedly charged to 100% state-of-charge and cause practically no fires in EVs. On top of that, they cost significantly less. It is the most popular choice in China today, which is still the global leader in battery technology," says Nemanja Mika?, founder and CEO of ElevenEs.

Strategic partnership for the gigafactory

ElevenEs has just signed agreements with EIT InnoEnergy, which Pitchbook ranks as the most active sustainable energy investor globally, known for being the first investor in other successful battery gigafactory ventures, such as Swedish Northvolt (recently closed $2,75 bn financing round) and French Verkor (closed a $100 m founding round and secured a strategic partnership with Renault in July 2021). The entities announced a strategic partnership to build the first LFP lithium-ion battery gigafactory in Europe.

By 2023, the ElevenEs plant will be able to produce LFP cells with a total estimated annual capacity of 300 MWh. The construction of the 100% renewable energy powered 8 GWh plant in Subotica (Serbia) will start in 2024. It will later be expanded to a capacity of 16 GWh – enough to equip more than 300,000 electric vehicles (BEVs) with batteries each year. The company has stated that it intends to employ up to 2,000 employees. Another key advantage is the fact that the facility is also very close to Jadar Valley, the largest deposit of lithium in Europe.

"LFP batteries are the next big thing on the battery landscape. Although nickel-based batteries outperform LFP on energy density and are likely to remain the best option for performance cars, LFP is far better in terms of cost, safety and lifetime, making it a perfect choice for industrial, ESS and city EV (shorter range) applications," says Jakub Miler, CEO at EIT InnoEnergy Central Europe.

"We have been working with ElevenEs for the past year and a half, and what came as the biggest surprise to us is that as much as 70% of the aluminium packaging process and know-how coming from their mother company, Al Pack Group, can be easily transferred to cell production. Having now developed their own LPF technology, that industrial experience of the Al Pack Group should allow them to progress much faster than any of their peers. And we are very excited to be taking that journey together."

ElevenEs is an industrial spin-off of the multinational Al Pack Group, which produces more than 40 million m² of processed aluminium foils every year and has been operating on the packaging market for 25 years. The Al Pack Group uses processes similar to electrode manufacturing, which is a key process in battery production. ElevenEs has an advanced research and development centre that has been operating since June 2021 in Subotica, Serbia, on the premises of its parent company. It employs an international team of engineers and scientists.

EIT InnoEnergy is the leading engine for innovation and entrepreneurship in sustainable energy across Europe and beyond.

EIT InnoEnergy has provided investments and added value services to some 380 sustainable energy related start-ups, of which 30+ are in storage, including flagship players like Northvolt – a vertically integrated sustainable battery manufacturer, Skeleton Technologies – a global leader in ultracapacitors who is playing a key role within leading OEMs, and Verkor – a France-based company building a gigafactory for the production of its battery cells.

EIT InnoEnergy was established in 2010, has invested €560 million in sustainable energy innovations and is supported by the European Institute of Innovation and Technology (EIT), a body of the European Union.